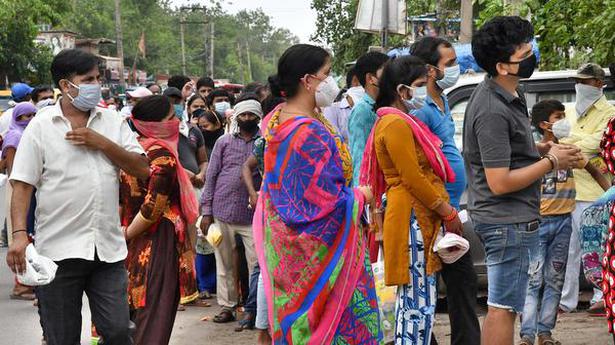 The Capital reported 1,163 new COVID-19 cases in the past 24 hours, taking the total number of cases to 18,549, according to a health bulletin released by the Delhi government on Saturday.

This is the biggest single-day jump in the number of cases in the city so far and the third consecutive day of over 1,000 cases. Also, 18 more deaths were reported taking the total to 416. But all the deaths did not happen in the past 24 hours.

Meanwhile, the number of containment zones in the city have increased from 73 on May 18 to 103 on Saturday, according to the bulletin.

A containment zone has a stricter form of the lockdown and people are not allowed to enter or leave the sealed off areas.

Meanwhile, a technical staff working at the Delhi government’s Lok Nayak Hospital, who had tested positive for COVID-19, died on Saturday, according to hospital authorities.

“He had tested positive around 15 days back and was admitted in the ICU of our hospital. We will be writing to the Delhi government for the ₹1 crore compensation for his family,” a hospital official added.

The employee was scheduled to retire in just over a month, said officials.

On April 1, Chief Minister Arvind Kejriwal had announced ₹1 crore as compensation for the family of any person who loses his/her life while serving any COVID-19 patient, including sanitation workers, doctors, nurses or any other staff, temporary or permanent, from the government and private sector.

The hospital authorities added that the medical director has also tested positive for COVID-19. LNJP Hospital has the highest number of COVID-19 patients among all the hospitals in the city.

A Delhi Jal Board (DJB) employee who was COVID-19 positive has died, a DJB spokesperson said on Saturday.

“The employee had a fever and tested positive on May 22. He died on May 27,” the spokesperson added.

The DJB has written to the Delhi government for compensation for the employee’s family.

Three more employees at the New Delhi Municipal Corporation (NDMC) tested positive for COVID-19 on Saturday, taking the total number of positive cases to 20, according to officials.

The NDMC headquarters was sealed on Thursday and a total of 11 employees have tested positive till now.

Also, multiple officials of the General Administration Department (GAD) at the Delhi Secretariat have tested positive for COVID-19, according to officials.

Meanwhile, the Delhi government has decided to make all 1,500 beds of GTB Hospital a COVID-19 treatment facility, instead of 500 beds as decided on Friday, according to a fresh order issued on Saturday.