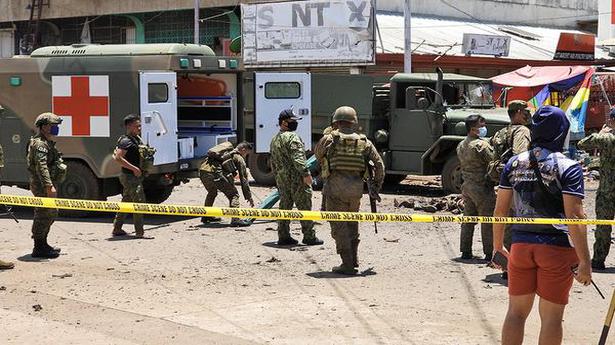 
Militants allied with the Islamic State group set off a powerful motorcycle explosive followed by a suicide bombing that together killed 14 people on Monday, many of them soldiers, in the worst extremist attack in the Philippines this year, military officials said.

At least 75 soldiers, police and civilians were wounded in the midday bombings in Jolo town in southern Sulu province, regional military commander Lt. Gen. Corleto Vinluan said. The bombings were staged as the government grapples with the highest number of COVID-19 infections in Southeast Asia.

Mr. Vinluan said most of the victims, including children, were killed and wounded in the first attack, when a bomb attached to a motorcycle exploded near two parked Army trucks in front of a grocery store and computer shop in Jolo.

“It was a vehicle-borne improvised explosive device which exploded while our soldiers were on a marketing run,” Vinluan told reporters.

A second blast, apparently from a female suicide attacker, occurred about an hour later and killed the bomber, a soldier, a police commando and wounded several others, a military report said. It said the suspected bomber walked out of a snack shop, approached soldiers who were securing a Roman Catholic cathedral and “suddenly blew herself up.”

Snipers were deployed in the area to guard against more bombers as the victims were carried to an ambulance.

A third unexploded bomb was reportedly found in a public market. Jolo was immediately placed in a security lockdown by troops and police.

Initial pictures seen by showed soldiers carrying a man from the scene of the explosion near an Army truck while another victim lay on the road. The wreckage of a motorcycle and body parts were seen on the road.

England hope bubble cricket can be blueprint for world game |...

US open golf: Justin Thomas grabs US Open lead while...