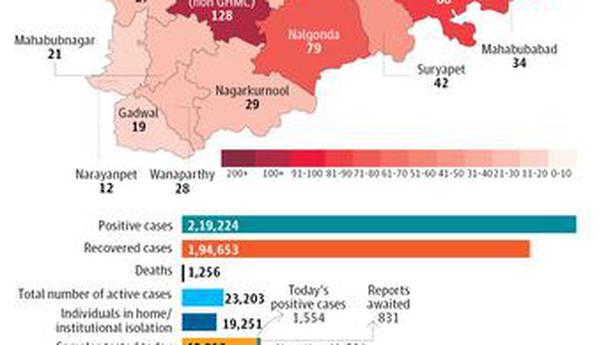 The case fatality rate continued to be much lower at 0.57 per cent against the national average of 1.5 per cent.

The number of recoveries continued to be on par or higher than the positive cases with 1,435 persons recovering from the impact of the virus on Thursday taking the total number of recovered persons to 1,94,653, inching closer to the two lakh mark. Recovery rate climbed up to 88.79 per cent as against the national average of 87.5 per cent.

Kumrambheem Asifabad district reported the lowest number of new positive cases at 8 and the number of positive cases was on the lower side in Narayanpet (12), Bhupalpally (15) and Jogulamba-Gadwal (19), according to the bulletin released by the Health department.