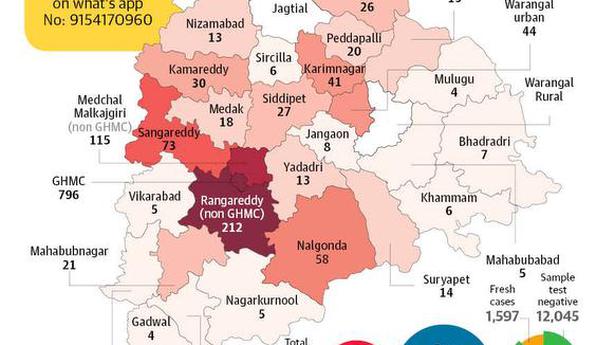 The total number of COVID tests in Telangana crossed two lakhs on Wednesday. A little over one lakh tests to detect coronavirus were performed in the past 12 days.

The total COVID cases in the State reached 39,342 as 1,597 more swab samples tested positive on Wednesday. Eleven more people died taking the toll to 386. Besides RT-PCR tests, the State government has started to perform Rapid Antigen Tests (RAT) from July 8. The number of tests shot up thereafter. Around 13,642 tests were performed on Wednesday alone which was the highest till July 15.

Till July 14, at least 25,000 RAT were performed. The total number of tests was mentioned in the medical bulletin issued by the State Health department. While 1.04 lakh tests were performed till July 3, one lakh more tests were performed from July 4-15 (12 days). The cumulative Test Positivity Rate dropped to 18.85%. The Positivity Rate was over 20% from July 4 -13. The new cases include 796 from Greater Hyderabad Municipal Corporation (GHMC), 212 from Rangareddy and 115 from Medchal. Of the total 39,342 cases, 12,958 are active cases, 25,999 were discharged and 386 patients died. The State is likely to cross 40,000 cases on Thursday.