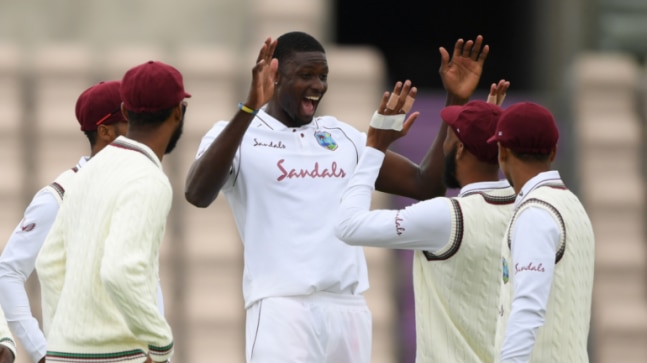 England vs West Indies, 1st Test Day 2 report: West Indies reached 57 for 1 after Jason Holder and Shanon Gabriel shared all 10 wickets between them to bowl England out for 204.

West Indies captain Jason Holder posted career-best Test bowling figures with six wickets as his side dominated the second day of the first test against England on Thursday.

Making full use of the murky conditions, all-rounder Holder took six for 42 and paceman Shannon Gabriel claimed four wickets as England were dismissed for 204.

Ben Stokes, captaining England for the first time in the absence of Joe Root, top-scored with 43 but might be regretting his decision to bat first having won the toss on Wednesday.

West Indies showed great discipline and rode their luck at times in reply as they reached 57-1 to put themselves in a decent position going into the third day at the Ageas Bowl when an improving weather forecast should aid batting.

James Anderson removed opener John Campbell for 28 but Kraigg Brathwaite and Shai Hope dug in against some express pace from Mark Wood before bad light ended the day’s play.

England are hosting the first international cricket-match after a 117-day absence because of the COVID-19 pandemic.

The match, the first of three, is being played without fans in a “bio-secure environment” with daily health checks for everyone in the ground, social distancing, home umpires and a ban on shining the ball with saliva.