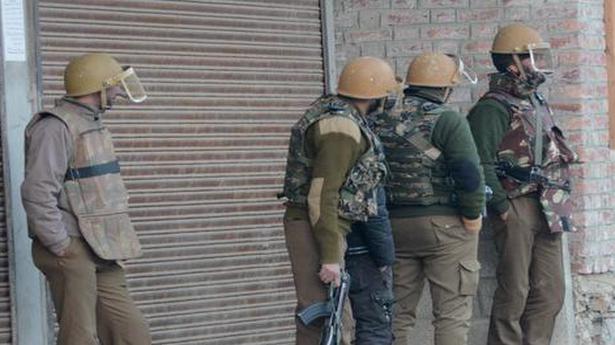 Two militants were killed in south Kashmir and two security personnel have gone missing along with service rifles from two different locations in central Kashmir’s Budgam on Wednesday.

Police suspect that one of the two missing security personnel may have joined the militant ranks.

Inspector General of Police Vijay Kumar said, “The two militants were killed during a joint cordon and search operation, launched after a specific input in Shopian’s Chakura area”.

He said the identification and affiliation of the killed terrorists was being ascertained. “Incriminating materials including arms and ammunition were recovered from the site of encounter”, the police said.

The last rites of the slain terrorists shall be performed after conducting the medico-legal formalities. “In case any family claims the killed terrorists to be their kith or kin, they can come forward for their identification and participate in the last rites at Handwara”, the police said.

Preliminary reports suggest the SPO was a resident of Qazipora in Chadoora and was working with the police for the past five years.

In the other incident, a Sashastra Seema Bal (SSB) constable has been reported missing from Nagam area of Budgam. The constable, who is from Rajouri, left the camp two days ago.

“The missing of an SPO is of concern. We are trying to locate him and bring him back. We are investigating if the SSB man has gone on an unauthorised leave,” Inspector General of Police (IGP) Vijay Kumar told The Hindu.

The Army foiled an infiltration by militants along the Line of Control in Tanghdar Sector of north Kashmir’s Kupwara district.

“A suspicious activity was observed of 3-4 intruders by alert troops on Wednesday morning close to a forward post. Timely action by the alert troops averted an infiltration”, the Army said.