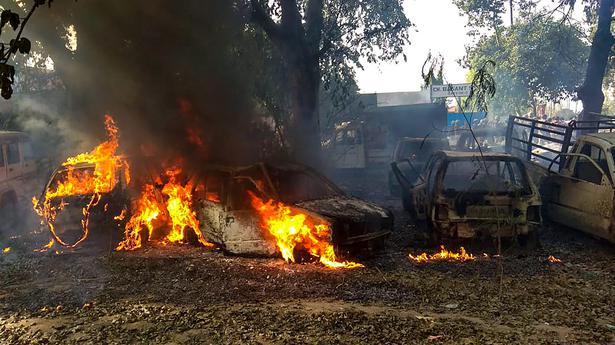 In a photograph that went viral on social media on Saturday, the district president of the Bulandshahr unit of the BJP is seen felicitating Shikhar Agarwal, one of the accused in the December 2008 Bulandshahr violence, during which a mob killed Inspector Subodh Kumar Singh.

Out of the 38 accused, police charged five with murder while Yogesh Raj and Mr. Agarwal, who are said to be associated with the BJP and its affiliate groups, were charged with inciting violence and arson over alleged cow slaughter.

At an event organised by the Pradhanmantri Jankalyankari Yojna Abhiyan (PJYA), Anil Sisodia, district president of BJP handed over a letter to Mr. Agarwal, stating that he had been appointed the general secretary for the campaign in the district.

The letter carries the photograph of the Prime Minister with the BJP’s lotus symbol, and lists Union Cabinet Ministers Narendra Tomar, Giriraj Singh and Dharmendra Pradhan, among others in the Margdarshak Mandal of the PJYA. The Facebook page of the PJYA describes it as a political organisation.

However, the BJP has distanced itself from PJYA. Denying any association with the organisation, Mr. Sisodia told reporters that he was invited by the members as the chief guest and did not recognise Mr. Agarwal. He said the party believed in clean politics and steered clear of people facing such serious charges.

Sanjay Gurjar, general secretary of the BJP unit in Bulandshahr told The Hindu, PJYA was not part of the BJP family.

“We were invited by some senior local businessmen for the event. We had made it clear that the event had nothing to do with the party,” he said.

On the use of names of senior party leaders on the letter, Mr. Gurjar said they would take action against the organisation. “All options are open, including legal action,” he said.

He added that there had been earlier attempts to link Mr. Agarwal with the BJP. “At that time we had maintained that he was not a party member. We stick to our stand.”

When The Hindu called up the number mentioned against the Delhi address of PJYA, the person receving the call identified himself as Aneet Kaushik, national president of outfit and claimed the letter issued to Mr. Agarwal was fake.

“We don’t issue individual letters to our volunteers. Somebody has misused our popularity on the ground and we will take strict action against them. We don’t know the person who has signed the letter,” he said.

Mr Kaushik said he had been associated with the Bajrang Dal during his college days and wanted to take the Prime Minister’s schemes to the grassroots.

However, he said, “We have no link with the party and we don’t use its resources,” adding that PJYA’s Facebook page was also fake.

Asked whether the organisation was registered, Mr. Kaushik said as it was a campaign, “we thought it was not required. Now, after a similar case was found in Madhya Pradesh, we are in the process of getting it registered.”

Mr Agarwal, on the other hand, said, “The photographs are self-explanatory. I was invited to hold the post as I am a grassroots worker. If some people want to disown me, it is up to them. I am not facing trial for murder in the case and am out on bail. If during this period, I want to contribute to society, what’s wrong?”

Mr Agarwal is among six accused who were released on bail in the Syana violence case in August 2019.

Assaulted by Delhi cops when asked about Hathras victim’s body at...