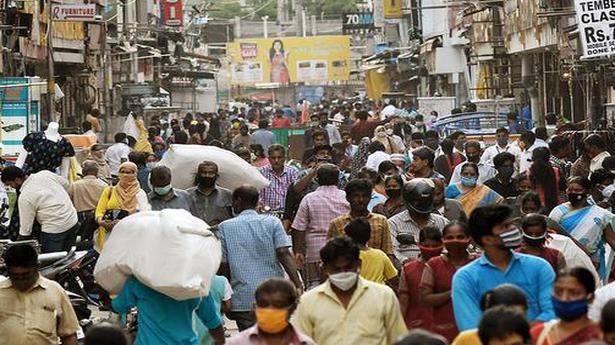 The Greater Chennai Corporation, with support from the district administration, has formed 32 teams to monitor all market areas in the 16 taluks of the city to enforce social distancing.

The teams of Revenue officials will monitor all violations pertaining to COVID-19 containment and prevent its spread in such neighborhoods. A decision to close trading for three months will be taken if the teams find such markets violating the COVID-19 norms.

Corporation Commissioner G. Prakash has directed officials to regulate markets where a large number of COVID-19 patients have been traced. Even after shifting most of the 81 markets, the civic body has been unable to control crowding in such places.

Civic workers in many of the 200 wards in Chennai said that contacts of COVID-19 patients had been traced to some of the 81 markets and commercial neighbourhoods. Corporation Deputy Commissioner (Revenue and Finance) Meghanatha Reddy said a meeting would be held with traders’ associations this week to create awareness among them about COVID-19 containment.

Tamil Nadu Vanigar Sangangalin Kootamaippu president A.M. Vikramaraja said the traders had reported a 70% dip in sales in Chennai because of the lockdown.

“Essential commodities trade has also registered a dip of 30% because people have low purchasing power during the pandemic. The sales have dipped because of the decision of the State government and the Corporation to close shops by 6 p.m. Most of the sales happen in the evening. But officials are harassing traders, forcing to close shops in the evening. We request Greater Chennai Corporation to reduce the fine amount. Small traders are forced to pay ₹5,000 as fine. Civic officials and the government line agencies have failed to realise that banks are forcing traders to pay EMI even after the government permitted six months time,” said Mr. Vikramaraja.

Corporation officials said each of the 200 wards had reported at least 10 violations every day, which increased the risk of COVID-19 spread.

The spread of COVID-19 had started increasing in zones such as Anna Nagar, Kodambakkam and Teynampet that had a large number of commercial establishments, the officials said.

Traders who violate physical distancing norms would be penalised, said an official.