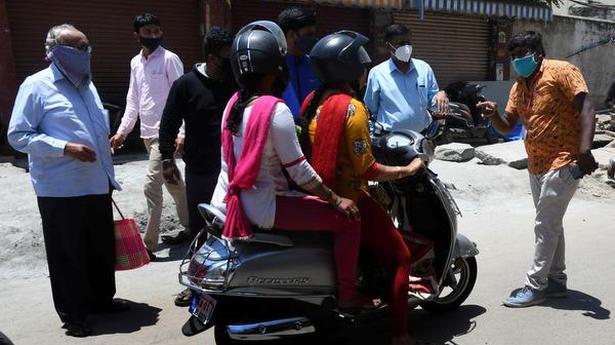 35.7% prefer home isolation, but the number is increasing owing to better awareness


A higher percentage of people in Bengaluru, who tested positive for COVID-19, have been admitted to hospitals compared to those who were in home isolation or COVID-19 Care Centres (CCCs).

An analysis by the BBMP COVID-19 war room between from July 1 and August 23 showed that while 38.4% of the 1.03 lakh people who tested positive were hospitalised, 35.7% of them chose to be in home isolation. As many as 15.8% of them were shifted to COVID-19 care centres.

As many as 10.1% of the patients who tested positive for COVID-19 have been categorised as “others”. The civic body is either unable to trace these patients or has not been able to find out which of the three options they have chosen.

The guidelines for home isolation of COVID-19 patients were issued by the State government on July 4 giving the option to be isolated at home if they have the necessary infrastructure. After this, the percentage of people in COVID-19 care centres too reduced as people chose home isolation. However, many continue to stay at COVID-19 care centres if they do not have the necessary infrastructure to isolate themselves or have elderly people with co-morbidities at home.

The highest number of cases in BBMP areas in this time frame has been reported in the West zone. As many as 21,346 people have tested positive in the West zone. In this zone, 43.1% of patients have chosen to be hospitalised.

Among all the zones, the highest percentage of patients who have chosen to get admitted in hospitals is from the West zone and the least is from the Dasarahalli zone.

Health experts say that the trend is changing as there is more awareness on home isolation. Many hospitals and clinics are providing home isolation packages for patients who have tested positive. They are scheduling video consultations with patients so that they can be treated in the comfort of their homes.

“Initially, people were not aware of the protocol to be followed during home isolation and chose to admit themselves in a hospital. But now fewer patients are getting admitted in hospitals. Only those who are 60 and above, and have co-morbidities choose to be hospitalised even if they do not have symptoms when they test positive,” he said.

Over the past few weeks, PHANA has apprised the government that many of their beds, including the 50% beds reserved for COVID-19 patients under the government quota, are going vacant as patients prefer home isolation.

R. Ravindra, president of PHANA, said that they are in talks with the State government to allow private hospitals to admit other patients if the beds under the government quota are vacant.

Special drive against those who do not wear helmet