Home Cities Hyderabad 45% of COVID patients are on oxygen support, 22% in ICUs 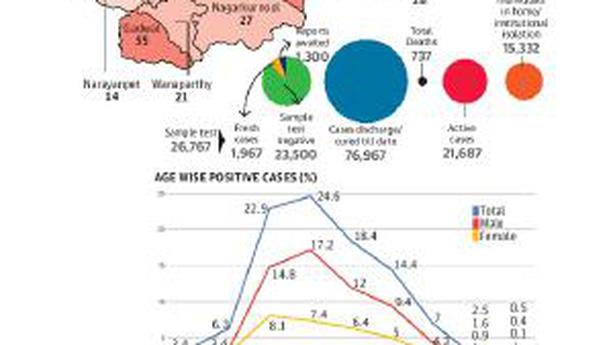 Telangana logged 1,967 COVID-19 cases on Thursday, according to the medical bulletin released by the State government on Friday. Eight more persons succumbed to the disease in the 24-hour period taking the toll to 737.

Worryingly, 45% of COVID patients being treated in government and private hospitals are on oxygen support, while 22% are being treated in ICUs of various hospitals, according to the bulletin by Director of Public Health.

The lowest number of cases were recorded from Mulugu district which had 11 positive cases while the Greater Hyderabad Municipal Corporation region recorded 473 cases.

The surrounding districts of Rangareddy (202) and Medchal (170) recorded higher number of positive cases as did Warangal (Urban) with 101 cases. All the 33 districts in the State reported cases over the 24-hour period.