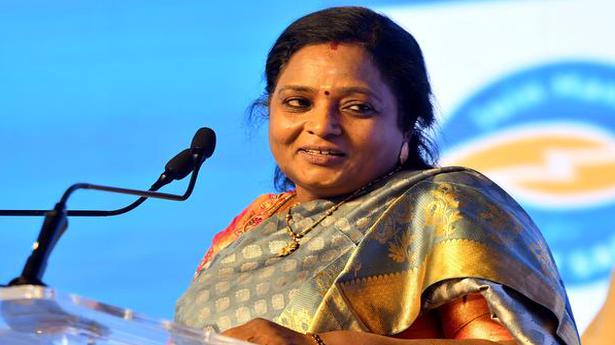 At least 48 security personnel, staff and family members of those working at the Raj Bhavan tested positive for COVID-19 on Sunday.

“Rapid antigen tests were conducted over the weekend since a few of the special police battalion personnel had tested positive in RT-PCR test as a part of contact tracing with the help of Director Public Health. In all, 395 tests were conducted out of which 347 were negative. Twenty police personnel tested positive and were sent for isolation immediately. Ten Raj Bhavan staff and 10 family members also tested positive, all of whom have been admitted to Government Ayurveda Hospital at S.R. Nagar for further treatment,” a Raj Bhavan press communique issued on Sunday night said.

Governor Tamilisai Soundararajan led from the front by not only arranging for the tests to be conducted for the staff and police personnel but also volunteered for getting herself tested. Her result turned up negative.

The Governor took to Twitter on Sunday evening to say, “I got tested for COVID-19 and negative. I appeal people who are in Red Zones or with contact history kindly get it done at the earliest. Early diagnosis not only to protect us but also others. Don’t hesitate! Test yourself motive others! Follow 4Ts Test Trace Treat Teach (sic).”

“You will find sanitisers at every nook and corner of the sprawling Raj Bhavan,” sources said, adding that they were not taking any risk.

“While a few were admitted at Gandhi Hospital for treatment, some of them are under isolation at the special facility provided in Battalion 1, Yousufguda, and others are under home quarantine,” she said.