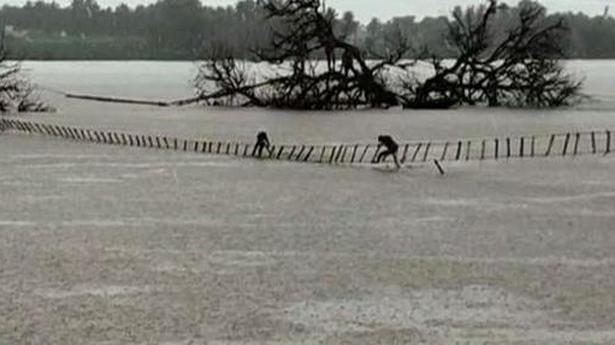 After failed efforts to coax the simians on to boats, fire services and forest department personnel used a rope ladder.


Monsoon rains have displaced people in many areas but there was a different group waiting for rescue since Friday near Tungabhadra river in Karnataka.

A troop of 50 monkeys had moved to a canopy of trees still above the overflowing river, near Rajanahalli in Harihar taluk of Davangere district. But strenuous efforts by personnel of the Fire and Emergency Services and the Forest Department to coax them on to rescue boats did not work. The 25-member team then threw a rope, which some bolder simians grabbed. But others baulked. Finally, it was a rope ladder snaking its way to the river bank that did the trick. The operation concluded on Sunday afternoon with the last of the members moving to safety using the ladder.

“On Saturday evening, five monkeys moved using the ladder. But many returned to the trees as it tilted, making them lose balance,” District Fire Officer, Davanagere, Basava Prabhu Sharma said.

With water levels rising, there was apprehension among the authorities whether the monkeys could be saved.

The team stabilised the ladder by tying it to stones and dispersed a crowd on the river bank that was scaring the monkeys, thus aiding their move to safety.

“By Sunday morning forty had moved to the river bank. There were ten more monkeys on another tree and we moved the rope ladder for them. By afternoon all reached the river bank”, Mr. Basava Prabhu said.