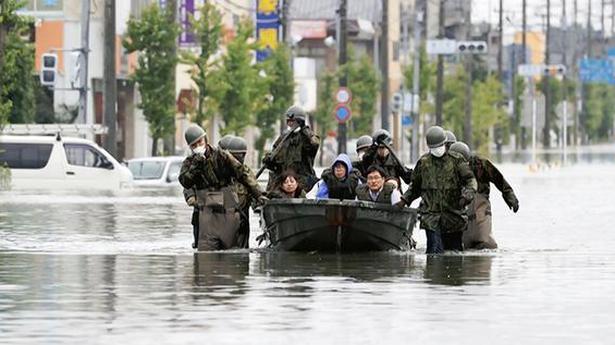 Soldiers used boats to rescue residents as floodwaters flowed down streets in southern Japanese towns hit by heavy rain that was expanding across the region on Tuesday. At least 55 people have died and a dozen remain missing.

Pounding rain since late Friday in the southern region of Kyushu has triggered widespread flooding. More rain was predicted in Kyushu and the western half of Japan’s main island of Honshu as the rain front moved east.

In Fukuoka, on the northern part of Kyushu, soldiers waded through knee-high water pulling a boat carrying a mother, her 2-month-old baby and two other residents.

“Good job!” one of the soldiers said as he held the baby up to his chest, Asahi video showed.

Tens of thousands of Army troops, police and other rescue workers mobilised from around the country worked their way through mud and debris in the hardest-hit riverside towns along the Kuma River.

Rescue operations have been hampered by the floodwater and harsh weather.