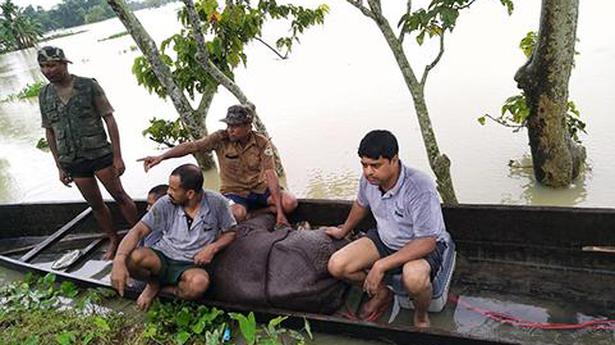 Nine people drowned in Assam on Saturday, taking the floods-related death tally to 59. The flood situation continued to worsen, affecting 32.94 lakh people across 28 of the State’s 33 districts.

Officials of the Assam State Disaster Management Authority said nine people died across five districts — three of them in Dibrugarh — during the last 24 hours. “So far, 59 people have lost their lives. Another 26 people lost their lives in rain-induced landslides,” an ASDMA spokesperson said.

A person each was reported missing in Golaghat and Morigaon districts. Officials said efforts were on to trace them.

Among the affected people across 3,371 villages and localities, 44,108 have taken shelter across 198 relief camps in 18 districts. An official estimate said crop on 1.28 lakh hectares has been affected. “Heavy rainfall in adjoining Arunachal Pradesh is adding to Assam’s woes. The Brahmaputra and nine of its tributaries are flowing above the danger mark,” the spokesperson said. Barpeta continued to be the worst affected district with 5.5 lakh people moving to makeshift shelters on higher grounds followed by Dhubri (4.11 lakh), Morigaon (4.08 lakh), Goalpara (2.5 lakh) and South Salmara (2.25 lakh).

IPL 2020: Nicholas Pooran credits Jonty Rhodes for making him a...