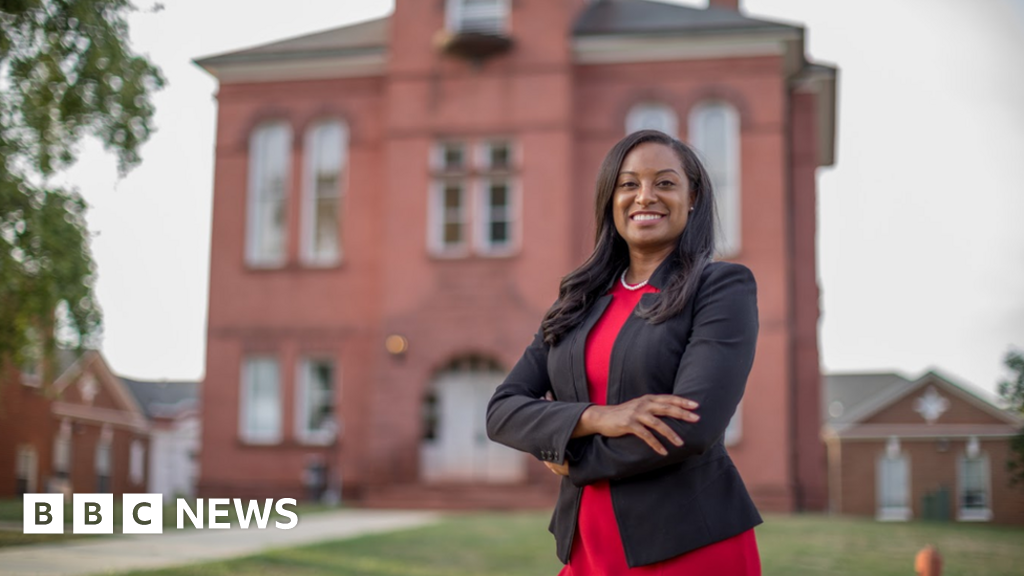 This year marks the 100th anniversary of the 19th amendment in the United States, which guaranteed American women the right to vote.

Although the amendment was ratified on 18 August 1920, it was preceded by decades of organising and protests – spearheaded by leading figures of US women’s suffrage like Susan B Anthony and Elizabeth Cady Stanton.

The 19th amendment is considered to be a seminal piece of legislation, but for minority women – particularly African-American, Hispanic and Native-American women – there was a long road ahead to ensure complete access to the vote.

To mark this year’s centennial, the BBC spoke to a number of women running for office – both Republican and Democrat – to see what has been achieved and what is left to do.

‘Little by little, those glass ceilings are coming down’

“It’s poetic that we have such a consequential presidential election in the 100th year that women have been able to vote,” Jennifer Carroll Foy said. A native of Petersburg, Virginia, she was raised by her grandmother – whose trademark adage was, “if you have it, you have to give it.”

It is a truth that Ms Carroll Foy seeks to employ in her politics.

While she is excited about celebrating the centennial of the 19th amendment, she is acutely aware that the amendment wasn’t wholly inclusive. Black and brown women faced an arduous journey to achieve equal voting access – that wasn’t conferred until the Voting Rights Act in 1965.

“As a black woman there is still work to be done,” she said. “Until all women have full and unfettered rights to vote, the fight for women’s right to vote continues.”

For Ms Caroll Foy, on the centennial of the 19th amendment, it’s even more important to have a woman of colour on the ballot. “When you don’t see women in power, it’s hard to fathom that being a possibility,” she said. “It’s not lost on me that I would be the first black woman governor in our country.”

Similarly, on this anniversary, Senator Kamala Harris’ spot on the Democratic ticket is particularly auspicious for Ms Carrol Foy, as it paves the way for black and brown girls everywhere to “see themselves in her”.

Beth Van Duyne, Candidate for the US House of Representatives in Texas, District 24 (Republican)

“I think about how far we have come,” Beth Van Duyne said. “It’s incredibly humbling to be one of the record number of Republican women running for Congress this year.”

According to Ms Van Duyne, the 19th amendment’s ratification has heralded decades of advancements for women. From the ratification of the Equal Rights Amendment, to the number of women enrolled in higher education, by way of new businesses founded by women. “It’s very gratifying to see that women are empowered, are supported, and are achieving success in greater numbers,” she said.

But Ms Van Duyne’s 16-year career in politics has been chequered by misogyny at various points. As the first female mayor of Irving, Texas, she remembers having to overcome an “old boy network” of all-male city council members. “I approached it from the outside in,” she recalled. “I don’t know how many men get called ‘honey’ at a council meeting.”

Moving forward, Ms Van Duyne is encouraged by the swathes of women entering politics. “As you get a more reflective body, you’ll see less division,” she added.

Julie Oliver, Candidate for US House of Representatives in Texas, District 25 (Democrat)

As a child, raised in a low-income household by a single parent, Julie Oliver wasn’t sure how her mother put food on the table. “I had no idea how she did it, but she did it,” Ms Oliver said. Her mother’s tenacity inspired Ms Oliver’s own run for Congress. This is her second run for District 25 in Texas, which encompasses Austin and Central Texas.

“I always say, ‘can you imagine what Congress would look like coming from the heart of a mother?'” she told BBC News. When she initially ran for Congress in 2018, she joked that her husband should have talked her out of the idea. Instead, she recalls how he encouraged her to run. “I’m grateful for the enlightened men in my life,” she added.

As a woman in politics, Ms Oliver believes that greater representation in the House would lead to a more collaborative policy approach across party lines. “Women have similar goals when it comes to education, access to healthcare and investing in infrastructure.”

Although the anniversary of the 19th amendment is cause for celebration for giving “a certain group of women the right to vote,” Ms Oliver feels that the centennial is an opportunity to reflect on the work remaining to enfranchise minority women across the country.

“It includes all women, not just white women,” she said. Ensuring that black and brown voices are empowered is integral to Ms Oliver’s run for office.

“But I hope people call me out when I’m not doing enough,” she said. “I want to be held accountable.”

‘As a working mother, how do I look after my people?’

Valerie Ramirez Mukherjee, Candidate for US House of Representatives in Illinois, District 10 (Republican)

Throughout her career in business and finance, Valerie Ramirez Mukherjee said that she was lucky to not experience gender discrimination, but would often hear from women who did. “I want to help solve this,” she said. “How do we get others to experience what I’ve experienced?”

Ms Ramirez Mukherjee and her brother were the first in their family to attend university, and she recalls that their mother didn’t raise them to see any difference between genders. “I didn’t see that there was a ‘role’ of a girl or a boy,” she said. “It was about who had the skill or the interest to get the job done.”

It was when Ms Ramirez Mukherjee wanted to start a family, that she was made to feel aware of her gender. Her two pregnancies were difficult, and she realised that trying to find time for necessary doctor’s appointments during the work day would unsettle her male colleagues.

Now, in her first run for public office, Ms Ramirez Mukherjee is focused on creating transparency for women in the workplace. “100 years later and we’re still having this conversation,” she said. “If a woman decides to start a family, how do we talk about that more?”

When it comes to the state of voting access in the US, Ms Ramirez Mukherjee is “grateful” that the mail-in ballot has become a widely discussed option this year. She believes that this will empower more people, particularly women, to vote.

“Not everyone has the privilege to go down to the polling station,” she said.

Turkey and Greece set up military hotline amid energy tensions