Home Cities Chennai A day to remember at the police station 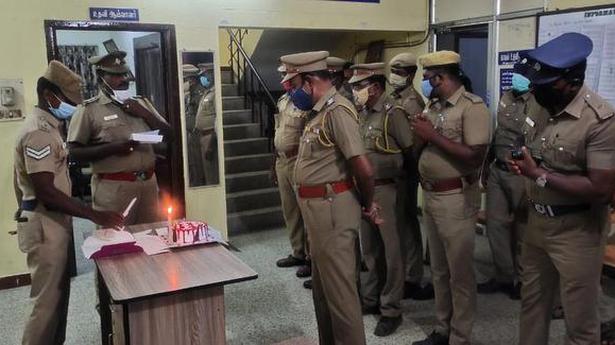 Besides cake-cutting the previous day, police personnel get to spend the day with their family

Around 7.30 p.m., on September 29, J. Mari, a Grade-1 police constable, was on duty at Lotus Garden in Kilpauk, and he received a call from the writer at the Kilpauk police station (G-3) asking him to report 30 minutes before the routine evening roll call at 9 p.m.

A stream of possibilities raced through Mari’s mind. For, this is something he had never before been asked to do, in all of his 12 years of service. He sought to find out from a few colleagues what it was all about, but they feigned ignorance. As he stepped into the station, Mari was warmly greeted by two dozen police constables and the Station Inspector.

Murugesan Kottaiswamy, Inspector (Law & Order), Kilpauk police station, shook his hands, giving him an advanced birthday wish. September 29 was his birthday and the station celebrated it the previous day.

An initiative by the Greater Chennai City Police Commissioner, Mahesh Kumar Aggarwal, the personnel of all wings of the Police Department, including Armed Reserve (AR), Crime, Law & Order (L&O) and Traffic, are to be given a holiday on their respective birthday. They also receive a birthday greeting card signed by the Commissioner the previous evening.

“I was in tears as I had never witnessed such a gathering and a cake being cut for my birthday,” says 35-year-old Mari.

Initially, the police personnel were being invited to the office of the Deputy Commissioner or the Assistant Commissioner and given the greeting card. They would cut the cake together. However, due to time constraints and to prevent overcrowding during the pandemic, the celebrations started being conducted in the respective police stations during the roll call every day now.

The reason to celebrate during roll call is because all the police personnel are present at the station as they report or sign off from duty at that time. “The aim is to forge bonds between police personnel especially during these uncertain times when they have to risk their lives for the larger good,” says 53-year-old-Inspector Kottaiswamy, adding that the initiative brings a lot of cheer to the entire team.

The Greater Chennai Police Commissionerate has 140 police stations divided into four zones — North, South, West and East within its 12 police districts. The department is said to be continuing its earlier practice of wishing police personnel on their birthdays, over a microphone at 8 a.m in the city. The announcer will also convey the birthday wishes from the City Police Commissioner. Now that tradition has been extended to include the cutting of a cake and granting a day’s leave for birthday and marriage anniversary celebrations.

Watch | A golu based on the film ‘Mayabazaar’