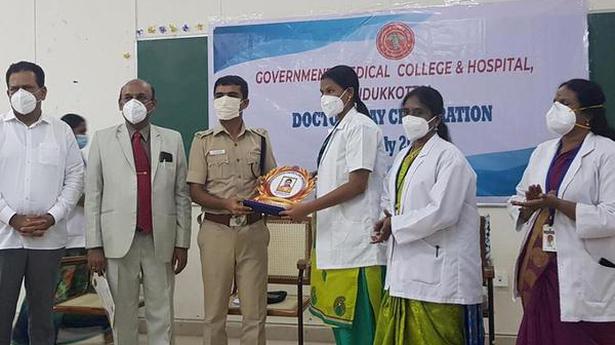 S. Arasapriya, a 26-year-old front-line worker, has had an eventful first year as a doctor, but has no time to celebrate. Posted in the COVID-19 ward of the Ranee’s Government Hospital here, she had stayed at the doctor’s room for over a month. Then she was allotted quarters on the campus of the Pudukottai Government Medical College Hospital.

“My life has changed in more ways than I can count,” she says. After graduating from the K.A.P. Viswanatham Government Medical College last year, she was posted as a medical officer at the Primary Healthcare Centre at Neerpalani in the Viralimalai block last July. In November, she was transferred to Ranee’s Government Hospital at Pudukottai. “From November to March, I was posted at the outpatient ward; but in March 2020, I was moved to the COVID-19 ward,” she says.

Since she was initially deputed at Neerpalani, the quarters given to her, too, was there, but travel during the lockdown was difficult. From March to mid-May, Dr. Arasapriya chose to stay at the duty doctor’s room at Ranee’s Government Hospital. “I felt that I could help two more patients instead of travelling 60 km a day.”

‘Bravery part of the job’

Asked if she was afraid of contracting the infection, she laughs. “My job revolves around being brave. Even if I am afraid, I cannot show it. I was a house surgeon in Tiruchi when H1N1 was spreading. Although there were not too many cases, that was my first experience with a serious communicable disease,” she says.

A day in Dr. Arasapriya’s life at the COVID-19 ward involves a six-hour shift in the day, or a 12-hour shift at night. A shift begins with the laborious task of wearing the PPE, she says. “Our Chief of Medicine trained us in putting it on properly as early as March. As it was very hot in the PPE, we struggled with dehydration. But it is all routine now,” she says.

After the suits are on, the doctors enter the COVID-19 ICU ward and check the vitals of all patients. Dr. Arasapriya says, “It is important to note them down. While patients at the COVID-19 general ward can complain about inconvenience and pain, these patients cannot and it is important to see them first.” Special care is also given to post-natal mothers who have tested positive.

“When Pudukottai saw its first COVID-19 death, we were all dejected,” she says. “The patient and his 12 family members were all admitted to the ward. After he died, I could not look them in the face. What can I say to console them? They saw him die,” she says.

At the Doctors’ Day Celebration at the Pudukottai Government Medical College Hospital, Dr. Arasapriya was given the ‘Best COVID Warrior’ award. “When I walked into the hospital, I did not know anyone in Pudukottai; but soon, I realised many former professors from Tiruchi were here. They have been my family away from home,” she says. “Following the doctors’ recommendation, a room in the campus quarters was given to me. Without them, I would not have had anyone to talk to,” she says.

Only after she received the award did many of her family members know of her posting, she laughs. She has not seen her family based in Madurai since February. “I’ve answered so many calls from the extended family, neighbours and friends, assuring them that I am safe.” Her parents pray for her every day on a video call.

“They know that I will prioritise my patients and so they remind me to stay safe,” she adds.