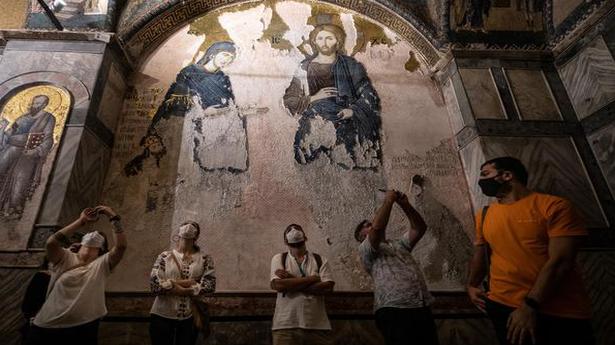 Originally a Byzantine church that had been converted into a mosque by the Ottomans, the Chora Museum is being reopened for Muslim prayers by Turkey’s President Erdogan

A month after turning the iconic Hagia Sophia museum, originally a cathedral, into a mosque, Turkey’s government has decided to convert another Byzantine monument in Istanbul, which has been a museum for over 70 years, into a working mosque. Late last year, the Council of State, the highest administrative court in Turkey, had removed legal hurdles for the Chora (Kariye) museum’s reconversion into a mosque. On Friday, President Recep Tayyip Erdogan, whose Islamist AK Party has long called for the reconversion of the Ottoman-era mosques that were secularised by Kemalists, signed a decree, transferring the management of the medieval monument to the Directorate of Islamic Affairs.

The church in the countryside

Originally built in the early 4th century as a chapel outside the city walls of Constantinople built by Constantine the Great, the Chora Church was one of the oldest religious monuments of the Byzantine era and of eastern Orthodox Christianity. The official title of the chapel, dedicated to Jesus, was the ‘Church of the Holy Saviour in Chora’. The literal meaning of chora in Greek is “country”. The chapel was called Chora as it was located outside the city walls. It’s believed that the land where the chapel was built was the burial site of Babylas of Antioch, a saint of Eastern Christians, and his disciples. When Constantinople expanded during the Theodosian period and Emperor Theodosius II built new land walls in 413 CE, the chapel came within the city limits, but it retained the name Chora.

Emperor Justinian I, who built Hagia Sophia during 532-537, reconstructed Chora after the chapel had been ruined by an earthquake. Since then, it had been rebuilt many times. Today’s structure is considered to be at least 1,000 years old. Maria Doukaina, the mother-in-law of Emperor Alexios Komnenos I, launched a renovation project in the 11th century. She rebuilt Chora into the shape of a quincunx, five circles arranged in a cross which was considered a holy shape during the Byzantine era.

The monk of Chora

Like many of the Byzantine monuments, the Chora monastery was also either damaged or allowed to languish during the Latin occupation of Constantinople in the 13th century. The leaders of the Fourth Crusade had established a Latin Empire in the city, which lasted about 60 years. Many prominent structures of the city, including Hagia Sophia, were damaged during this period. After the Byzantines recaptured Constantinople in 1261, they launched a campaign to restore these monuments.

During the reign of Emperor Andronikos II, the scholar Theodore Metochites was appointed ktetor (founder) of the monastery. Metochites undertook a massive restoration project in 1316. Most of the museum’s famous mosaics, frescoes and paintings were commissioned by Metochites. A portrait of Metochites offering the church to Jesus is still hanging above the main entrance of the museum. He rebuilt the dome of the main worship place, constructed chapels to either side of the sanctuary and added a new funeral chapel to the south.

Metochites’s story is intrinsically linked with Chora. During Andronikos II’s reign, he rose to be the Prime Minister and the head of the treasury. Following a palace coup in 1328, seven years after his restoration work was complete, the new emperor Andronikos III Palaiologos banished him from Constantinople. He was allowed to return after two years in exile, but the new rulers of the city confined him to the Chora Monastery. In 1332, he died, after taking monastic vows as the monk, in the monastery and was buried in the parekklesion, the funeral chapel he built.

After the Ottomans captured Constantinople under the command of Mehmed II (Mehmed the Conqueror) in 1453, they immediately converted Hagia Sophia into a mosque. The Chora Church was converted into a mosque in the early 16th century by Grand Vizier (Prime Minister) Atik Ali Pasha of Sultan Bayezid II, the successor and the eldest son of Mehmed II.

After the conversion, most of the mosaics, frescoes and paintings of the monument, including the Jesus mural called ‘The Land of the Living’ and the ‘Mary and the Baby Jesus Surrounded by her Ancestors’, were plastered over. The Ottomans added a mihrab (a niche indicating the direction of Mecca) and replaced the bell tower with a minaret. The Chora Church became the Kariye Mosque. Many visitors to the mosque during the Ottoman period have documented that some of the mosaics were visible inside the mosque, which gave it the popular name the ‘Mosaic Mosque’ among tourists.

After the fall of the Ottoman Empire, the new Turkish republic launched a secularisation drive. Hagia Sophia was converted into a museum by Mustafa Kemal, the founder of modern secular Turkey in 1937. In 1945, under Kemal’s successor and the second President of the republic Ismet Inonu, the Cabinet decided to convert Chora into a museum following which the Byzantine Institute of America and the Dumbarton Oaks Center for Byzantine Studies started a restoration programme. It lasted for 12 years during which most of the original mosaics and paintings were restored. The building was opened to the public in 1958 as a museum — Kariye Müzesi.

For almost 2,000 years, Chora has remained one of the landmark monuments of Istanbul. The monument also represents the complex and deep culture of the city — the Byzantine Constantinople, the Ottoman Istanbul and the cultural and commercial capital of the secular Turkish state. Now, President Erdogan is turning it into a mosque again, as part of his re-Islamisation of Istanbul and Turkey.