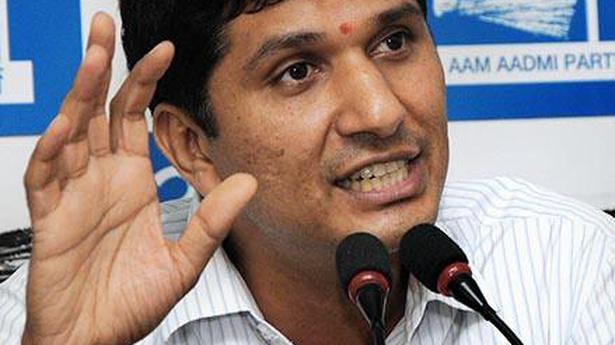 Strategy was planned at topmost level and it was decided that BJP will fight the Delhi polls on the issue, says Saurabh Bharadwaj

The Aam Aadmi Party (AAP) on Monday accused the Bharatiya Janata Party (BJP) of scripting the anti-CAA protest at Shaheen Bagh and executing the Delhi riots in its name after losing the Delhi Assembly elections earlier this year.

AAP chief spokesperson Saurabh Bharadwaj alleged at a press conference that the people who protested were also part of the BJP. Mr. Bharadwaj’s allegations came in the wake of several Shaheen Bagh residents joining the BJP here. The Shaheen Bagh protest was a civil society sit-in staged against the Citizenship (Amendment) Act and the National Register of Citizens. It started in December last year and continued till March-end.

The BJP accused AAP of trying to save its face given the alleged role of its suspended councillor Tahir Hussain in the riots while the Congress accused the ruling party of attempting to divert attention from the failures of the Delhi government.

“A lot of people went there [Shaheen Bagh] to protect democracy and they will be shocked to know that they were betrayed as the protest was scripted by the BJP. Yesterday [Sunday], BJP Delhi chief Adesh Gupta and [party vice-president] Shyam Jaju did a press conference and said all major leaders of Shaheen Bagh have joined the BJP. Now, people who raised anti-national slogans will be part of BJP? Or were they BJP’s people who were protesting there on directions of the party,” asked Mr. Bharadwaj.

The AAP leader said that the Delhi election could have been fought on electricity, water, roads, pollution, or dengue, but the BJP had fought it on Shaheen Bagh.

“It is not that Parvesh Verma or Anurag Thakur created this strategy. Such a strategy is planned at the topmost level and it was decided that BJP will fight the Delhi election on Shaheen Bagh. It was completely scripted. They decided who will speak what, who will attack whom and then who will be doing the counter-attack. All these things were preplanned and scripted,” Mr. Bharadwaj said.

Reacting to the AAP allegations, Delhi Congress chief Ch. Anil Kumar said that the ruling party, instead of holding press conference and addressing the problems faced by the people of Delhi in the middle of a pandemic, is trying to divert the attention of the public by bringing up Shaheen Bagh.

“Delhi, which used to be know for its development and harmony when Sheila Dikshit was the Chief Minister, has now become famous for communal riots. There are so many infrastructural issues and problems but the government is not addressing them,” Mr. Kumar said.

BJP media panellist Nighat Abbas argued that the residents of Shaheen Bagh “had now understood that the CAA did not seek to deprive any-one of citizenship and had decided to choose the BJP”.

“Today, when the people of Shaheen Bagh want peace and want to go with the BJP, AAP is scared because now Muslims will not suffer any more exploitation for vote bank,” she said.