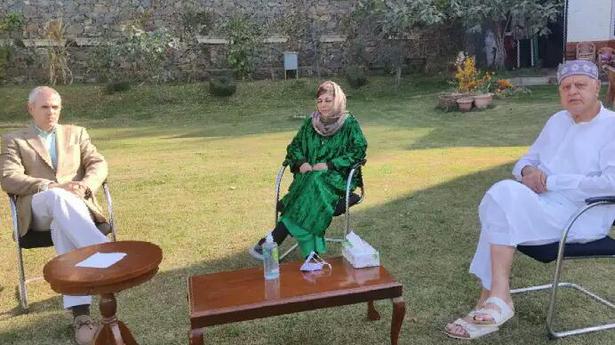 Leaders agree on the need to put up a joint front.

National Conference (NC) president Farooq Abdullah and vice-president Omar Abdullah on Wednesday met Peoples Democratic Party (PDP) president Mehbooba Mufti, released after 14 months on Tuesday, at her residence and extended an invitation to hold a meeting of all the signatories of the Gupkar Declaration, a pact to fight for the restoration of J&K’s special status.

The Abdullahs, once considered arch rivals of the Muftis, arrived at the official residence of Ms. Mufti at Gupkar on Wednesday afternoon. Party sources said the leaders discussed the situation in Kashmir and “agreed on the need to put up a joint front”.

Abdullah Junior, who described the meeting as a courtesy call, said: “It was only after the Supreme Court’s intervention that Ms. Mufti was released. Our visit today has nothing political about it. We met to find out how she was doing.”

Ms. Mufti thanked the Abdullahs. “It gave me courage listening to him [Dr. Abdullah]. I am sure together we all can change things for the better, she said.

In an indicator of cementing relations between the two major regional players, Mr. Abdullah said Ms. Mufti has accepted an invitation to attend the meeting of the Gupkar Declaration at his residence around 4 p.m. on Thursday.

“All the signatories of the Declaration will be meeting. The future course of action will be decided jointly,” Mr. Abdullah said.

In an audio uploaded online, Ms. Mufti, toughening her stand, said the struggle will continue to get back what “the Delhi Darbar has snatched away by unconstitutional and undemocratic means” and sought resolution of the Kashmir issue.

“Everything the Delhi Darbar snatched away by unconstitutional and undemocratic means has to be got back. People also need to keep struggling for the solution of Jammu and Kashmir, which has led to sacrificing thousands of lives,” Ms. Mufti said.

Ms. Mufti, 61, said the abrogation of Article-370 “had been hurting her heart and soul during every moment of her detention”.

She said the “path ahead won’t be easy but I believe that our courage and determination will be our companion in walking this path”. She also demanded “immediate release of everyone from J&K who are languishing in various jails of the country”.

SHRC asks KSRTC to care for the ill, elderly, women