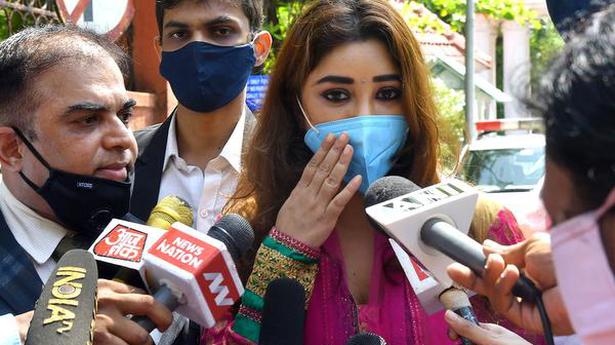 The meeting came about a fortnight after the Mumbai Police registered an FIR against Kashyap following Ms. Ghosh’s accusation that he had sexually assaulted her in 2013

Bollywood actor Payal Ghosh on Wednesday met Union Minister of State for Home G. Kishan Reddy and sought speedy justice, in the wake of her allegation of sexual misconduct against filmmaker Anurag Kashyap.

Met up with Shri G. Krishan Reddy who is the MOS of @AmitShah ji at @HMOIndia and also the minister of state of home ministry and had a very fruitful and forwarded conversation on the issue. It’s an issue faced by many and now is the time to act (sic), she tweeted.

The meeting came about a fortnight after the Mumbai Police registered an FIR against Kashyap following Ms. Ghosh’s accusation that he had sexually assaulted her in 2013.

The filmmaker has dismissed the allegations as baseless.

Before meeting the Union Minister, Ms. Ghosh told reporters that she has come to seek speedy justice .

I will ask for intervention of the Home Ministry, if required. I have already met the NCW (National Commission for Women), she said.

Ms. Ghosh, however, did not speak to journalists after meeting the minister.

She had also tweeted in the morning: I am heading to @HMOIndia to meet the officials. It’s a fight to the end and no fake agenda can deter me. Bring it on. #LetTruthComeOut .

The FIR was registered under the Indian Penal Code Sections 376 (I) (rape), 354 (assault or criminal force to woman with intent to outrage her modesty), 341 (wrongful restraint) and 342 (wrongful confinement), police had said.

In her complaint, the actor had alleged that Mr. Kashyap had raped her at a place on Yari Road in Versova in 2013.

Mr. Kashyap vehemently denied the actor’s allegation and termed it as an attempt to silence him for his outspoken views.

He has also said that at the time of the alleged incident, he was in Sri Lanka and that he was actively pursuing legal options.

Mr. Kashyap’s lawyer Priyanka Khimani said on October 2: “Mr. Kashyap has categorically denied that any such alleged incident ever took place and has also denied all allegations levelled against him”.