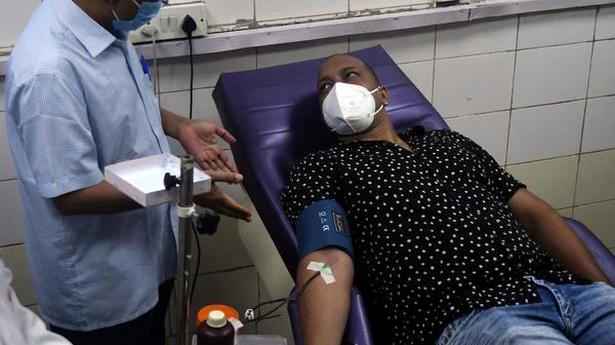 The Chief Minister said that the government will continue setting up facilities and beds even if the beds for COVID-19 patients remain vacant to ensure there is no shortage if the cases surge.

“Today [Tuesday], Dr. Suresh and his team have started Delhi’s second plasma bank at the Lok Nayak Hospital. Delhi is the first State to have launched India’s first plasma bank at the ILBS Hospital. Plasma has been proven to be helpful in the treatment of COVID-19 infected patients and saving their lives until a vaccine comes,” he said.

“We are not claiming that 100% of lives will be saved through the plasma, but it has been effective in treating people. Plasma has also played an important role in declining the death rate in Delhi. The Lok Nayak Hospital is located in central Delhi, so it will be convenient for people to reach here and donate plasma,” he also said.

Mr. Kejriwal said the spread of pandemic in Delhi is gradually reducing and the recovery rate of patients is increasing. Earlier, 35 out of 100 people tested would be diagnosed with the virus whereas only seven or eight people out of 100 are found positive now .

The number of fatalities due to COVID-19 had also come down from about 101 per day in mid-June to around 40 now, he pointed out.

More than 200 people have taken plasma from ILBS so far. “We do not want to store plasma in the bank forever, but no one should suffer for lack of plasma either. Many people are coming for plasma, they are getting it and no one is denied plasma. Everyone is now getting plasma easily,” he said.

He also credited the Delhi government’s “strong fight” against the virus to all institutions and support from the Central government and other agencies.

“I am happy that the Prime Minister has also praised the model of Delhi and everyone’s cooperation in it,” the CM added.