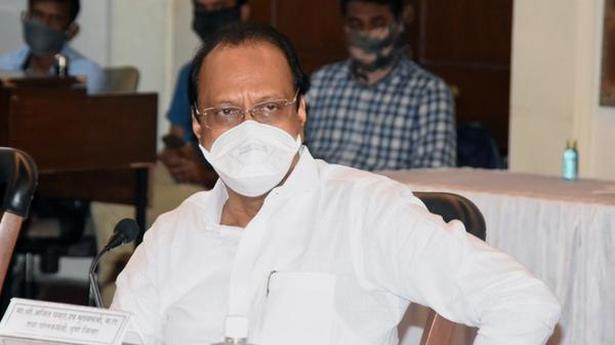 With the rise in COVID-19 cases in Pune district, Deputy Chief Minister Ajit Pawar on Friday said the district administration should implement restrictions on people’s movement only after discussions with elected representatives.

“The number of COVID-19 patients is increasing at an alarming rate in Pune district. The administration can take a decision to discourage assembly and movement of people in consultation with elected representatives of Pune district and the Mayors of both Pune and Pimpri-Chinchwad civic bodies,” said Mr. Pawar, Pune’s Guardian Minister, after his weekly review meeting.

Mr. Pawar said ensuring uninterrupted supply of oxygen in hospitals was the need of the hour. He directed the district administration to take note of the rise in COVID-19 patients with coronary heart diseases. The district has been witnessing daily spikes of more than 4,500 cases and 50 deaths on an average for the past three weeks. The total case tally has crossed the 2.50 lakh mark with over 42,000 active cases and nearly 5,400 deaths so far.

However, Mr. Pawar’s suggestion was met with fierce criticism from Siddharth Shirole, Bharatiya Janata Party MLA from Shivajinagar. He objected to any intimations of a ‘lockdown’ or a ‘quasi-curfew’. “Any restriction on public movement or lockdown at this stage will not be accepted by the people of Pune. They have suffered enough already through lockdowns imposed by the district administrations which were steamrolled only to hide the incompetence of the authorities and the failures of the government,” he said.

Mr. Shirole asked why Mr. Pawar and the authorities were contemplating such a move when Pune’s residents had given the administration enough time to bolster its medical infrastructure.

“The taxpayers of Pune, with infinite patience, had permitted the administration an ample six-month period to set up mega facilities in the city. However, thanks to the complete ineptness and lack of coordination between authorities, the jumbo hospitals have come up only now. Even then, they are not being operated at full capacity,” he said.

Mr. Shirole said barely 40% of the 1,100 beds in the city’s jumbo facilities were functional. He said it was unfair to impose restrictions on the pretext of breaking the virus chain when more than 60% of Pune’s infected populace had quarantined themselves at home.

“More than half of the COVID-19 patients are treating themselves at home. But the administration cannot even take care of the rest, of whom critical cases are even fewer. Then, pray, what is the use of these jumbo facilities, allegedly built with state-of-the-art equipment to serve critical care needs?” Mr. Shirole said.

Meanwhile, Mr. Pawar reiterated his warning that no negligence on part of the authorities would be tolerated if there were any lacunae in measures to check the spread of the contagion. “The administration should be very careful in planning and making the beds available to the patients and the general public with updated information in the computer system,” said Mr. Pawar.

Stating that there was an immediate need to drastically reduce the morbidity and mortality rates in urban as well as the rural areas of Pune, Mr. Pawar assured that the Maha Vikas Aghadi government will provide adequate funding to establish and enhance medical facilities to prevent the spread of the virus.

“The Department of Health and Public Works should expedite the completion of pending work for more oxygenated beds and other amenities and must make efforts on a war-footing to staff medical personnel in the newly-constructed rural hospitals,” he said.

Mr. Pawar urged authorities to work hard to ensure timely delivery of oxygenated beds and proper treatment to patients. “Adequate health facilities and medical equipment should be provided in rural hospitals for the treatment of patients in rural areas,” he said.