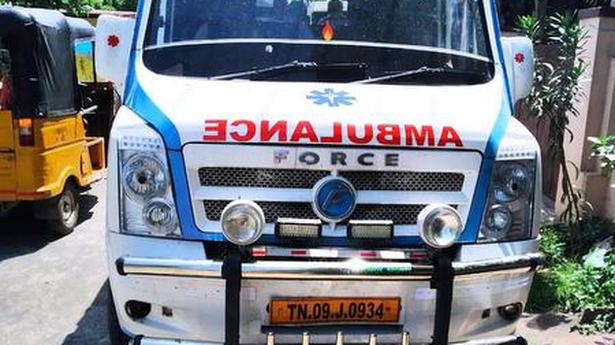 As getting an e-pass to travel out of or into Chennai has become tougher during the complete lockdown period, people have started using illegal means to travel. On Tuesday, the Chengalpattu police stumbled on one such attempt, where a few people used a private ambulance to travel from Thiruverkadu to Gingee on Tuesday.

The ambulance driver has been arrested and seven others, including an 85-year-old man, who were travelling in the vehicle have been detained, and further investigations are on. Police claim that the passengers and driver decided to make the elderly person pose as a patient in order to not get caught. Police have warned of arrest if people resort to such illegal methods of travel.

As the city and neighbouring districts are under a complete lockdown, movement between the districts has been restricted. Only those with valid e-passes are allowed to pass through the checkposts.

Around 10.30 a.m on Tuesday, V. Ponramu, Additional Superintendent of Police, was checking vehicles near Vandalur. He spotted an ambulance travelling at high speed. However as the vehicle did not stop at the check post and was driving in a rash manner, he grew suspicious and alerted DSP Mahendran who was on duty at the Paranur toll plaza.

The police personnel stopped the ambulance and inside, they reportedly found an elderly man and six others. They were taken for inquiries. “The driver’s name was Manivannan (25). He drives the private ambulance and usually waits outside the Government Kilpauk Hospital to transport sick persons and bodies,” said a police officer. He was approached by a few people who wanted to travel to Gingee. He took an advance of ₹7,000 and some more money was supposed to be paid at the destination. “The driver and passengers made Damodaran, the 85-year-old man, act like a patient to avoid suspicion. They all boarded from Thiruverkadu,” the officer added.

The police have arrested the ambulance driver. Further investigations are on to find out if he had ferried others in a similar manner. “We have been getting reports about people using private ambulances to travel out of and into Chennai. We are now checking all the ambulances,” added a senior police officer.