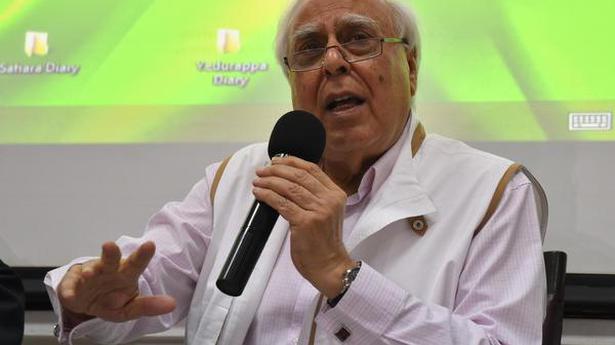 Even as the Congress Working Committee meet to discuss leadership issue is under way, senior leader Kapil Sibal’s tweet created flutter, albeit briefly.

Mr. Sibal hit out at former party president Rahul Gandhi on Monday over the latter’s reported remarks that the leaders who have written to interim chief Sonia Gandhi for organisational overhaul were “colluding with the BJP”.

Mr. Sibal, one among those who wrote the letter to Ms. Gandhi, said he never made a statement “in favour of the BJP on any issue in the last 30 years.”

At the CWC, Mr. Gandhi questioned the timing of the letter by dissenters questioning the party leadership even as Ms. Gandhi has expressed her desire to step down, a source informed The Hindu. A section of media reported that Mr. Gandhi charged that the letter seeking leadership changes was written in cahoots with the BJP. The Hindu couldn’t independently verify if Mr. Gandhi indeed made such a remark at the meeting.

Congress spokesperson Randeep Singh Surjewala, who is attending the CWC, stepped in to clarify that Mr. Gandhi has not made any such statement. “Sh. Rahul Gandhi hasn’t said a word of this nature nor alluded to it. Pl don’t be mislead by false media discourse or misinformation being spread. But yes, we all need to work together in fighting the draconian Modi rule rather then fighting & hurting each other & the Congress.” he tweeted.

Later, Mr. Sibal withdrew his tweet and wrote: “Was informed by Rahul Gandhi personally that he never said what was attributed to him. I therefore withdraw my tweet.”

Rain batters life in Kodagu, other parts of South Karnataka