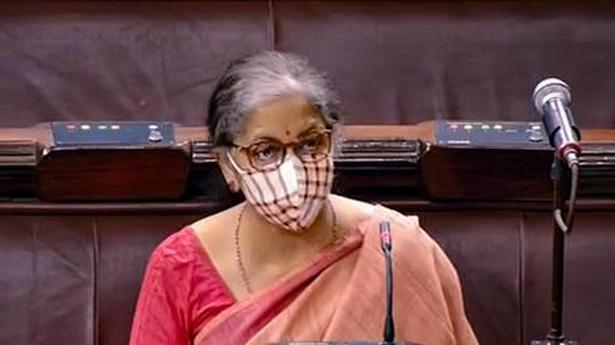 
Amid a boycott of House proceedings by many Opposition parties, Rajya Sabha passed seven key bills in three-and-a-half hours on Tuesday. Among the legislations passed was a key bill removing removes cereals, pulses and onion from the Essential Commodities list. Another Bill abolishes penalty for certain offences by companies.

Most of the Opposition, including the Congress, Left parties, the TMC, the Samajwadi Party and the NCP, decided to boycott proceedings for the remainder of the session in protest against the suspension of eight MPs.

The next Bill to be moved by Minister of State for Consumer Affairs Danve Raosaheb Dadarao was the Essential Commodities (Amendment) Bill, 2020. This is one of the legislations which has sparked widespread farmers’ protests.

Mr. Dadarao said the ordinance was promulgated in the midst of the lockdown so that farmers had a way of selling their crops, adding that it was in the interest of farmers and consumers.

The Minister said the Bill removes the clause that compelled traders to stock food grains as prescribed by the government, adding that this will boost investments in the sector. He however, said the power to reimpose stock limits lies with the government and it could be invoked in times of emergencies such as drought or war.

Vijaisai Reddy of YSR Congress said the power to regulate the supply by the central government is very narrow and asked the government to show data on the measures taken against hoarders.

The Banking Regulation (Amendment) Bill, 2020, which was moved by Union Finance Minister Nirmala Sitharaman was also passed in the Upper House.

Ms Sitharaman said the Bill was important as there have been many banks and cooperative societies that have had problems in the past one and a half years. This amendment is to protect the interests of depositors and a quick recovery can be given without a moratorium, Ms. Sitharaman said.

“Only those cooperative societies that use the word bank or function as a bank will be covered by the amendment. These amendments will not apply to primary agriculture credit societies. During the COVID period, many cooperative banks have come under stress. 277 urban cooperative banks are reporting losses, 105 are unable to meet minimum regulatory capital requirement,” she said.

The fourth Bill that was passed was the Companies (Amendment) Bill which amended 13 sections and added one chapter for ease of living.

The House also passed the Rashtriya Raksha University Bill, 2020, to upgrade the Gandhinagar police training university to a national university.

The seventh Bill — the Taxation and Other Laws (Relaxation and Amendment of Certain Provisions) Bill, 2020 — was returned by Rajya Sabha.