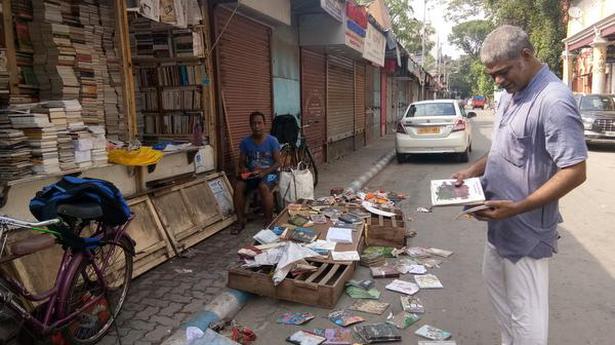 A couple of days after the super cyclone Amphan hit Kolkata, a tall, dark man was seen in College Street, the city’s gigantic book bazaar, drying books on the road in front of a shop, ‘Dhyanbindu’, a serious publisher. The middle-aged man, Abhik Bandyopadhyay, who owns the publishing house, was sad. Water had risen to the knee-level during the cyclone, damaging the books at his workstation-cum-shop. The desktop was damaged, erasing unfinished but edited manuscripts, a half-constructed e-catalogue and accounting files. “Boi ar bikri kora jabe na [it would be difficult to run book business],” said Mr. Bandyopadhyay.

Subrata Das of Setu Prakashani said COVID-19 was the last nail, while cyclone Amphan buried the coffin of books in boi-para, as College Street is usually described. “Business stopped over the last three months. Counters were closed, our online sales were actually zero as it was impossible to deliver. Now, online sales are up by about 10% but our College Street counter sales is still zero,” Mr. Das said.

Even outside boi-para, publishers have suffered immensely. Susmita Basu Singh of Rritobak, a publisher working for about two years, said she is broke.

“I started crying when I entered my office the day after the cyclone. The books are gone, the furniture’s plywood is damaged. The computer, which had about 70-80 edited manuscripts, is dead, and they [the manuscripts] need to re-edited, re-proofed,” she said, her voice choked. Being a new publisher, she was not yet covered by insurance, a problem faced by many.

“There are so many workers, particularly the office assistants, who are not skilled in any particular way, and they are out of work,” she said. Other publishers said the last Kolkata Book Fair, disrupted by rain and storm, did not deliver its usual return, accentuating the crisis.

Bengal’s book trade, with an annual turnover of about ₹1,000 crore may not be huge by industry standards but it is labour intensive. It employs not less than 5 lakh people, from publishers to porters, according to an estimate of the Publishers and Booksellers Guild. Many associated with the ancillary work are in deep trouble.

“At least half a dozen motors of my offset machine are dead and it requires ₹8,000-₹10,000 to repair each of them,” said Debasish Auddy, owner of a printing press, Sarat Impressions. Assessing the scale of damage, the Guild developed a catchline — ‘Let’s rebuild College Street Boi Para together’ — and donated a seed fund of ₹5 lakh, seeking donations after opening a bank account.

“There are about 2,000 publishers and booksellers in College Street. The Guild is inviting applications from June 3 till June 30 from publishers, with an estimate of their losses to extend support,” said the Guild’s president, Tridib Chatterjee. The support is only for the publishers located in College Street, where the damage is to the tune of ₹5 crore, he said. Other estimates pegged the overall damage in the range of ₹15 crore-₹20 crore.

Meanwhile, almost single-handedly, one person had raised about ₹15 lakh till Friday afternoon, using a crowd-funding platform. Indrani Mitra Roy, owner of 87-year-old publishing house Mitra and Ghosh, was supported by mainly booklovers from across the world. A timely tweet from politician Shashi Tharoor helped her, she said.

“Kolkata’s College Street (Boi Para) is as legendary as the smell of ideas wafting out of Coffee House, but Cyclone Amphan ravaged it, leaving battered books, flooded stores and devastated booksellers already reeling from the COVID-19 lockdown. Let’s help them,” the precise tweet from Mr. Tharoor, who spent years in Kolkata, noted. He provided the platform’s link too.

“We have managed to provide support of ₹10,000 each to 50 small publishers and we are processing 120 more applications and it was done in an absolutely transparent manner, providing details on social media,” Ms. Roy said. The boi-para, however, is looking forward to support from both the State and Central governments to revive Bengal’s most prestigious business of books.