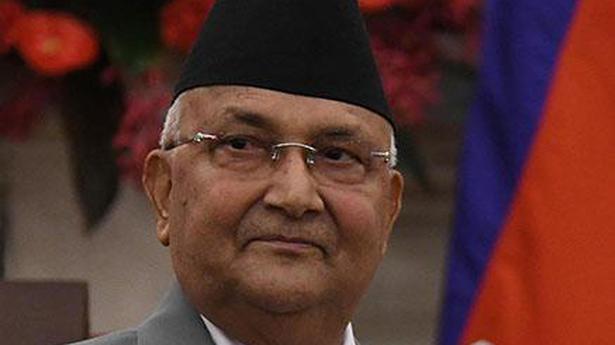 With his decision to push through a Constitutional amendment to change Nepal’s official map to include parts of Indian territory that have been in dispute, Nepal Prime Minister K.P. Sharma Oli has proven the worst fears of many in South Block, who have worried for some years about Mr. Oli’s “nationalist politics” that translates in Nepal to an “anti-India” stance. In the past month alone, statements Mr. Oli has made have shocked many in India: from his vow to “reclaim” Limpiyadhura, Lipulekh and Kalapani from India and “get them back”, to a crude comparison on COVID-19 between the “Indian virus” being “more lethal” than the virus from China, to insulting the national Ashoka Chakra emblem saying the lions represented India’s “hegemonic” designs (Mr. Oli referred to “Singham Jayate” rather than “Satyamev Jayate” in a Parliament speech). For others, this has only reinforced a belief that Mr. Oli is someone the Modi government cannot do business with.

The irony, say diplomats is that the perception of Mr. Oli as anti-India only goes back about five years. “Prior to 2015, if you were to ask which Nepali politician had worked most consistently towards strengthening ties with India, the answer would be K. P. Sharma Oli,” explains former Ambassador to Nepal Rakesh Sood. In 1996, for example, Mr. Oli split from his own party, the Communist Party of Nepal’s Unified Maoist-Leninist (CPN-UML) faction, in order to support the Nepal-India agreement over the Mahakali river water sharing treaty. As Home Minister of Nepal, diplomats recount how he cooperated with Indian authorities to pursue wanted criminals who had crossed over the open border between India and Nepal. In later years, too, despite the fractured ties between Nepal’s top leadership, and frequent accusations and counter-accusations of India’s support to different politicians, Mr. Oli appeared not to be antagonistic to New Delhi, and was a frequent visitor to India.

“That [perception] changed in 2015,” says Mr. Sood, referring to the events that led up to the promulgation of the Nepali Constitution, one that India felt was unfair to Madhesis living in the south and unrepresentative of India’s interests in the country. Mr. Oli was a key mover for the Constitution, which he agreed to support in a deal that would see him take over as Prime Minister in place of the Nepali Congress leader Sushil Koirala, once it had been adopted. At the last moment however, Mr. Koirala decided to challenge Mr. Oli to an election in Parliament, a decision many in Kathmandu believed was prompted by India. Even though Mr. Oli defeated Mr. Koirala in the election in October 2015, he faced another challenge from New Delhi, this time in the form of a blockade at the India-Nepal border that saw supplies into land-locked Nepal stopped on the Indian side for months. The blockade came within months of the worst earthquake Nepal had faced in decades, and made the new Prime Minister’s job more difficult.

“That’s when China stepped in for Mr. Oli,” says Nepali author Sujeev Shakya, referring to an eight point transit and transport facilitation agreement Mr. Oli signed with Beijing in March 2016, and that gave Nepal access to dry ports and rail links from China for the first time. The deal did not reassure India, which had already expressed misgivings over China’s Belt and Road Initiative (BRI). Within four months, Mr. Oli faced his next challenge, when the Communist Party faction led by Prachanda, as former Nepal PM Pushpa Kamal Dahal is known, pulled support from his government, something for which Mr. Oli blamed New Delhi. A year later, Mr. Oli had sprung back, this time with a unified Communist Party, that included all the senior leadership: Mr. Oli himself, Mr. Dahal, Madhav Nepal, Jhalanath Khanal and Bamdev Gautam, and won the election in December 2017, running on an anti-India poll plank that saw his new party win a historic two-thirds seats in Parliament, given Nepal’s fractured mandates.

With the Opposition subdued, Madhesi activists co-opted or jailed, and a largely uncritical media, Mr. Oli coasted along for the first two years, until he faced protests in Kathmandu last year over India’s new political map, published to show the changes wrought on August 5 and the dilution of Article 370 that split Jammu and Kashmir from Ladakh. For Mr. Oli, the slogans raised by his political rivals, akin to those he faced a decade ago of being an Indian agent, returned to the streets, and as he faced a possible coup within his own party’s standing committee meeting, analysts say his tone grew shriller.

“For PM Oli, this [nationalistic plank] is also a legacy building exercise. The Nepali Congress will always be credited with bringing democracy to Nepal and the monarchy was brought down by Prachanda,” says former Ambassador to Nepal Manjeev Singh Puri, who retired just after the Kalapani issue erupted last year.

India has also hardened its position with Mr. Oli. Despite PM Modi agreeing in 2014 that the Foreign Secretaries would meet on the Kalapani and Susta disputes, no meeting on the disputes has been held in six years. The government dismissed Mr. Oli’s demand to release the report of an Eminent Persons Group (EPG) that was due to suggest some solutions on the border issues. In December, New Delhi cancelled a visit by Mr. Oli’s envoy, and the Nepali Ambassador to Delhi has not had a meeting scheduled by the Ministry of External Affairs despite requests. Meanwhile, both the U.S. and China have raised their diplomatic prominence there, by posting Ambassadors who mix freely in Kathmandu and rival each other with videos of themselves dancing and singing local songs. Mr. Oli is being wooed by Chinese aid for infrastructure, and by the U.S. government’s ‘Millenium Challenge Corporation’ that has offered $500 million in grants. “At present PM Oli feels he is trying to practice strategic autonomy, with both U.S. and China pushing projects here. And India is refusing his overtures,” says Anil Giri of The Kathmandu Post, who covers the Nepali PM closely. In that sense, Mr. Oli’s latest move on the maps maybe a fait accompli. The ball is in New Delhi’s court.

National camp for women wrestlers to begin on October 10 |...