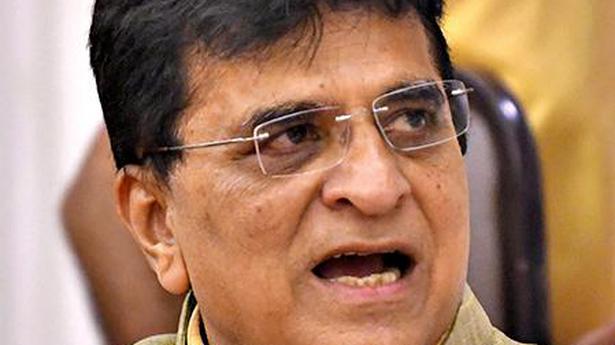 Former Bharatiya Janata Party MP Kirit Somaiya on Saturday asked Maharashtra Home Minister Anil Deshmukh when he would apologise to women for the crimes against them.

On a visit to the Indiabulls Covid Care Centre at Kon village in Panvel — where a 25-year-old COVID-19 patient is alleged to have raped a 40-year-old woman in quarantine on Thursday — Mr. Somaiya said, “This is shameful. Previously we heard of body missing from hospital, then COVID patients going missing, and now this. I really want to know when does Mr. Deshmukh intend to apologise.”

The rape accused and the victim had been admitted by PMC. As per the complainant, the accused had posed as a doctor and approached the lady to offer her a massage for her body ache.

The swab test of the victim, who was quarantined on July 14, was reported negative on Saturday while the accused, quarantined on July 15, has tested positive. A guard has now been posted there. “We will arrest the accused after seeking advice regarding his treatment,” said senior police inspector Ashok Rajput from Panvel Taluka police station.

Ms. Wagh demanded, “Not just the accused, but each officer whose negligence led to this crime should be penalised and strict action taken against them. How did that man end up in the women’s section?”

Condemning the incident, Ms. Choutmol said, “All patients are kept in separate rooms for their safety and we never thought something like this could happen. Security will be increased and men and women will be put up in different buildings.”

Speaking about the political developments in Rajasthan, Mr. Somaiya said that the BJP was being unnecessarily dragged into the issue. “It’s an internal issue of Congress, where they are alleging corruption against each other,” he said.

Malabar Hill is crumbling, two landslides in the space of less than two months