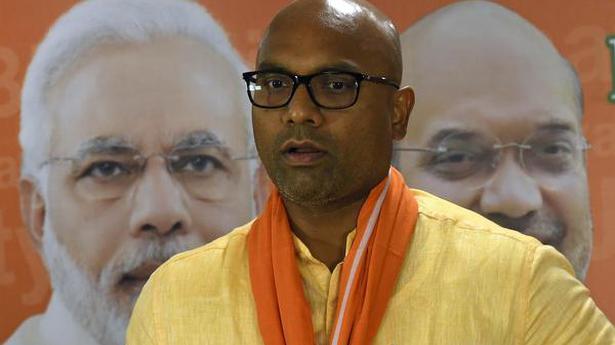 Nizamabad MP Dharmapuri Arvind’s car was attacked in Warangal allegedly by TRS activists who threw stones and eggs when he was on his way to Hyderabad after addressing a press conference at the BJP party office.

Mr. Arvind, who made a scathing attack on Chief Minister K. Chandrasekhar Rao in the press conference also targeted the TRS MLAs of Warangal city, Dasyam Vinay Bhaskar and Nannapaneni Narender accusing them of indulging in land encroachments.

Apparently annoyed with his comments, followers of the MLAs tried to obstruct his car raising slogans against him. Mr. Arvind said they threw stones and eggs on his car but there was no damage. Some 10 to 12 people gathered but only four or five reached his car with clear intentions to attack him. Local BJP leaders were seen accusing the police of remaining silent while the TRS activists tried to stop the car of a Parliament member. But the police caught hold of a couple of activists even as Mr. Arvind left the place. A car allegedly also followed him on the national highway for some time.

“Physical attacks will not deter me but the incident only reflects the intolerance of the ruling party,” Mr. Arvind told The Hindu.

Earlier, he tweeted saying “Anti- Hindu forces in TRS attacked me in Warangal, Telangana, where I visited to address a press conference on ‘Aatma Nirbhar Bharat Abhiyan’. They also chased my vehicle on the highway to Hyderabad.” He said a people’s representative is attacked and chased in the broad daylight and it only reflects the chaos in Telangana.

The BJP State president Bandi Sanjay condemned the attack and claimed that those involved were the henchmen of leaders who resorted to land grabbing. He also demanded suspension of police officials present there for failing to protect a Parliament member. He also warned that BJP would not keep quiet if they were attacked and would pay back in the same coin.

Indians lucky so far, but situation could get worse: CCMB director

We will try a few combinations but won’t experiment too much...