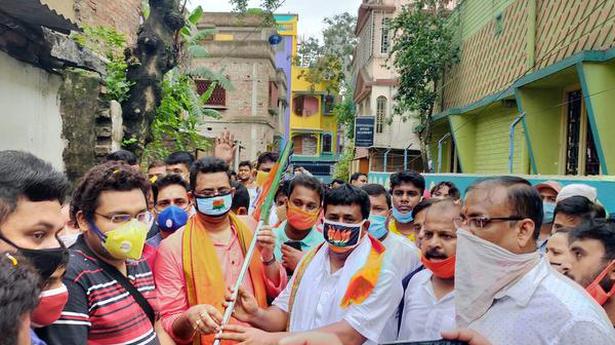 All those messages urging people to maintain social distancing to prevent the spread of COVID-19 appear to have gone down the drain, if general public behaviour in the city — and the steady rise in the number of daily cases — are any indication.

What is ironical is that while the awareness campaigns — regarding wearing of masks, washing of hands and maintaining social distancing — were conducted aggressively during the prolonged lockdown, when not many ventured out anyway, one can sense a lack of the education at a time when it is needed more than ever.

As a result, a large number of those stepping out of their homes are throwing caution to the winds; their logic seems to be that if the lockdown has been eased then everything must be fine. Tea stalls and markets are crowded, roadside eateries are back in business and the daily evening adda in several neighbourhoods has resumed. The fear of the virus is not preventing even avoidable public gatherings.

Dr. Shreya Ghosh, an orthodontist, who had to visit a well-known lab in Alipore for urgent blood tests on Monday, was horrified to see the manner in which people had flocked at the facility. “The only social distance I noticed there was between the cash counter and the first person in the queue. Otherwise it was a free for all. Many patients walked in with family members and that only added to the crowd. Several of the women used the loose end of their saree as mask, while some men used their handkerchief. People thought nothing of brushing past one another,” she said.

If this is the scene from a lab, where the risk of infection is very high, one can well imagine the situation on streets and street-corners. In neighbouring Howrah, which is a maze of narrow streets, a large number of people gathered on June 13 in ward no. 33 to witness an event in which over 100 Trinamool Congress workers joined the BJP in the presence of its MP Saumitra Khan. Mr. Khan later tweeted pictures of the event, which took place in a street packed with the not only the people concerned but also bystanders.

And also in Howrah, on June 19, BJP workers took out a procession to condemn China. Those in the procession called for a ban on Chinese goods and shouted that the martyrdom of the 20 Indian soldiers killed on the border with China would not go in vain.

On Monday, angry parents descended on a school in south Kolkata in protest against the school charging fees for the lockdown period though it had not conducted online classes during that period. Parents, flouting all social distancing norms, submitted a list of demands to the school management and sought a reply within three days.

During the initial weeks of the lockdown the West Bengal administration — including the police — had been proactive in propagating anti-coronavirus measures but it now appears to be going easy on educating the public. A jingle composed and set to tune by Chief Minister Mamata Banerjee, asking people to be safe and not fear the virus, would once frequently play on FM channels and street corners but has not been heard in a long time now.

PM should not have attended “bhoomi pujan”, says Bengal Minister

Mumbai: Search on for leopard spotted in Andheri’s MIDC area |...