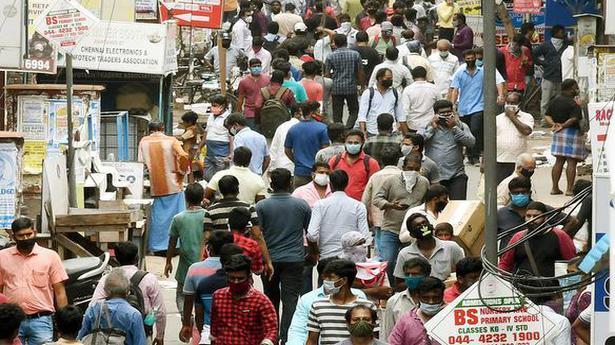 The lives of city dwellers and those in its adjoining districts slowly got back on track after the complete lockdown restrictions were relaxed on Monday.

As police permitted free movement within city limits, a large number of two-wheelers, autorickshaws, call taxis and other private vehicles took to the roads, including the arterial Anna Salai, Kamarajar Road and E.V.R. Salai.

Iron barricades, which had been erected during the lockdown to deter free movement, were removed. Flyovers, including Anna flyover, Alwarpet flyover, the grade separator in Guindy and the Padi flyover, were opened for traffic. At main junctions, traffic police were busy releasing vehicles seized during the lockdown as many motorists queued up before police outposts.

Additional Commissioner of Police, Traffic, N. Kannan said, “We had made prior arrangements to ensure smooth flow of traffic from the morning on the roads.”

South Chennai roads were abuzz with traffic since the early hours of Monday as soon as the complete lockdown was lifted. All vehicles, except public transport, were seen plying on Velachery Main Road and Taramani Road. The southern arm of the Inner Ring Road Extension, linking Velachery Main Road with GST road, which had remained devoid of activity during the complete lockdown, became busy as morning walkers thronged the road.

Motorists queue up at Nehru Park in Kilpauk to collect vehicles which were seized during the lockdown.

Most shops, textile and jewellery showrooms were open since morning in T. Nagar, the city’s main commercial hub. People also flocked to Ritchie Street, the main electronics hub, as police regulated them and their vehicles at designated entry points.

A senior police officer said, “Our personnel are positioned at vantage points in any busy commercial area and are vigilant. Using a public address system, personnel are frequently appealing to the public to maintain physical distancing.”

Meat and Poultry shops which resumed business after 12 days witnessed roaring sales even as customers adhered to social distancing norms. Online meat shops said there was a huge demand for chicken, mutton and fish. Sushil Kanugolu, Managing Director and CEO of Fipola Retail India, said, “We did over 10,000 orders which is higher than the orders that we normally get on Sunday. We had to close our online slots early due to a high volume of orders. We had good walk-ins as well across all our stores in the city.”

Salons and Spas across were completely booked for the entire day. While smaller salons had people waiting in queues to get a haircut, the larger ones serviced customers who had made appointments in advance. “We had good walk-ins. If proper safety measures and hygiene protocols are followed, brands will get their business back,” said Sravan Raghunathan, owner of Spa Senza, and added, “This is an opportunity for brands to reinvent themselves.”

Neighbourhood shops, vegetable vending outlets, hotels and restaurants opened their shutters as well. P. Pandiarajan, secretary, Ashok Nagar Traders’ Welfare Association, said though all shops were open on Monday, there was not much crowd. Most reported only 50% of the usual customers. “We are managing with 50% of our employees, since the government has allowed only a minimal workforce,” he added.

Many people heaved a sigh of relief as service personnel for air conditioners, reverse osmosis units and gas stoves finally became accessible. S. Saravanan, proprietor, Smart Water Solutions, Teynampet, said his men attended over 15 calls on Monday, in contrast to their usual four to five calls a day. “We have been getting calls even after the lockdown came into force. We could only send men by foot since two-wheelers were not allowed. In one case, we got a call from a home with a COVID-19 case but we told the man not to enter the place,” he added.