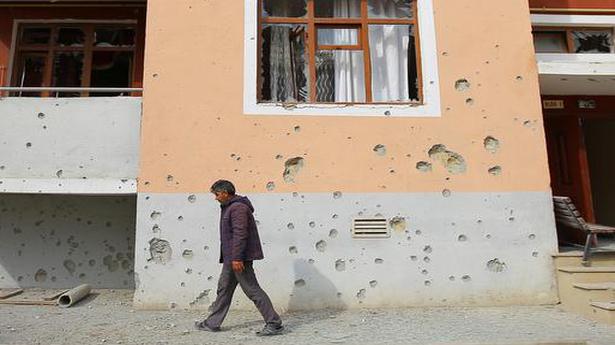 Armenia and Azerbaijan rejected international calls for negotiations and a halt to fighting as fierce clashes over the disputed region of Nagorny Karabakh spilled over into a fourth day on Wednesday.

Armenian and Azerbaijani forces are engaged in the heaviest fighting in years over Karabakh, an ethnic Armenian province that broke away from Azerbaijan in the 1990s during the collapse of the Soviet Union.

The Hindu Explains | What’s behind the Armenia-Azerbaijan clashes?

The conflict erupted on Sunday with the two sides trading heavy fire. Nearly 100 people are confirmed to have died in the flare-up and both sides are claiming to have inflicted heavy losses on opposing forces.

Azerbaijan has not admitted any military deaths but an AFP journalist in the southern Beylagan region saw dozens of women wailing over the coffin of a soldier killed in the clashes.

Azerbaijan on Wednesday vowed to pursue military action against Armenian separatists in the Nagorny Karabakh region until a full Armenian withdrawal from the disputed territory.

There has been increasing international pressure for a ceasefire, as fears grow that the conflict could escalate into a devastating all-out war and draw in regional powers like Turkey and Russia.

Defence officials in Yerevan on Wednesday accused Turkish jets of performing “provocative flights” along their shared border and of violating Armenia airspace, a day after Yerevan said a Turkish jet had downed one of its warplanes.

Moscow has called for an end to the fighting and offered to help with talks.