Home Cities Chennai As restaurants open post-lockdown, here is a sneak peek at what you... 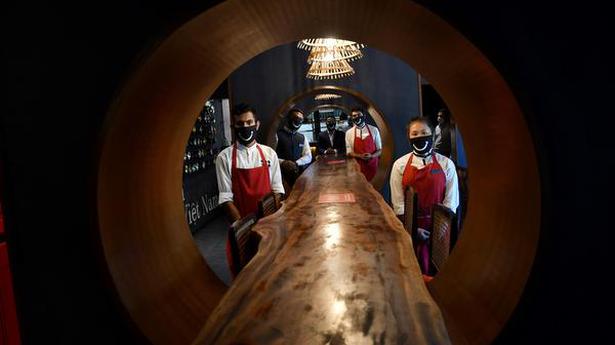 The valet smiles behind his mask, but the only give-away is a friendly crinkle around his eyes. As Chennai’s Soy Soi prepares to welcome customers back after almost 80 days, the team is lining up sanitisers and dim sum with equal energy.

A staffer holds up an infra-red temperature gun as the manager, in a smiley mask, opens the door with a flourish. Inside, although the space is still reassuringly familiar; QR codes have replaced menus, fans whir above instead of air-conditioners and the masked staff now bear sanitisers, not appetisers.

As restaurants open today in many cities, one thing is clear, COVID-19 has changed dining. And your next restaurant meal is going to be very different from that last dinner before the Janata Curfew of March 22.

Infra-red temperature screening in progress at Soy Soi in Chennai


Nikesh Lamba, Executive Director of Pricol Gourmet (which runs Soy Soi, Savya Rasa, Bharat Bistro and Double Roti) walks through the dining space in a mask, pointing out how they will block alternate tables. While rules differ in each State, guidelines released by the Ministry of Health and Family Welfare on June 4 direct restaurants to run at 50% of their capacity, encourage takeaway, disinfect tables, deep clean washrooms and enforce face masks. They also suggest staggering patrons.

Discussing how they have set new systems in place to enable near-contactless dining at Soy Soi, Nikesh points at their new acrylic food covers, which protect sanitised crockery and cutlery, on each table. Customers can now scan a QR code on the table to order their food, and also pay online.

COVID-19 has hit the restaurant industry hard all over the world, with thousands losing jobs. Reopening is complicated: chefs and restaurateurs are navigating an unsteady web of new rules and regulations, which are influenced by shifting health advisories as the world grapples with the pandemic. In India, each State Government has its own rules — Tamil Nadu for instance, does not allow air-conditioning in restaurants for now. At Soy Soi, they now have acrylic food covers, which protect sanitised crockery and cutlery, on each table


With only 40 of their 80 seats operational, and a shorter window for dining (timings are currently noon to 8 pm), Nikesh says they are not expecting many customers, and are focusing instead on takeaway. “We don’t know if people will come in,” he shrugs, adding, “But we had the kitchen open anyway for delivery, so we decided to open the restaurant.”

They are working with a skeletal staff as many of their cooks and waiters left Chennai for their home towns when lockdown began. “Now, many of their parents are hesitant to let them return to the city,” says Nikesh. However, Karthik Podatur, who works as the manager at Savya Rasa, says he is eager to return to work, over a phone call from Nagari, in Madurai district.

“Sitting at home just watching four walls is very tough. My brother is a weaver, so sometimes I help him on the power loom to time pass… I even called the chefs and made some Savya Rasa dishes at home, like the kozhi peralan,” he says. He adds, “But I miss the guests, the food and the chatting. It is not only for the money,” he states, adding that he is taking the next bus to Chennai so he can return to work. He says the “boys are all calling and asking when they can come back”, but for now only the ones in Tamil Nadu are returning, as crossing state borders is complicated.

Mumbai-based entrepreneur and restaurateur Riyaaz Amlani, who is a former president of the National Restaurant Association of India (NRAI) explains how they are working on changing restaurant layouts, and setting up systems to be compliant with the laws, but the process is complex. The CEO of Impresario Handmade Restaurants, which has popular brands like Social, Smoke House Deli and Mocha under its umbrella, Riyaaz currently runs 59 restaurants in 16 cities across India.

Discussing the impact COVID-19 will have on the industry, he says, “I hate to be a doomsday prophet, but it is not looking good. About 15-20% of restaurants may not reopen. Then sustaining them will be the real challenge, because under these circumstances, we lose more money when we reopen…” Riyaaz predicts a “30 to 40% erosion of restaurants in the country in the next year”.

With increased costs and reduced income, the focus now is on survival. Riyaaz explains that the delivery model only brings in a very small percentage of total sales for restaurants built and designed for diners. “We have also noticed delivery go down by about 60%,” he states, adding however that they continue to run takeaway menus in some restaurants, mostly to stay engaged with customers.

Chef Regi Mathew, who runs Kappa Chakka Kandhari in Chennai and Bengaluru, has also spent the last few months focussing on connecting with customers via a special lockdown menu, which he sometimes delivers himself. Not ready to open, he says he is going to “wait and watch”.

In the meantime, he has asked his staff, many of whom have returned to their home towns in Kerala, to cook. “I told them, spend time in your mom’s kitchen. I got lots of new recipes this way, like fish made with banana stems. Or cooked with tamarind leaves.” All this will come to be useful when he finally reopens, as he intends to create a menu rich in healing foods, including Ayurvedic herbs. 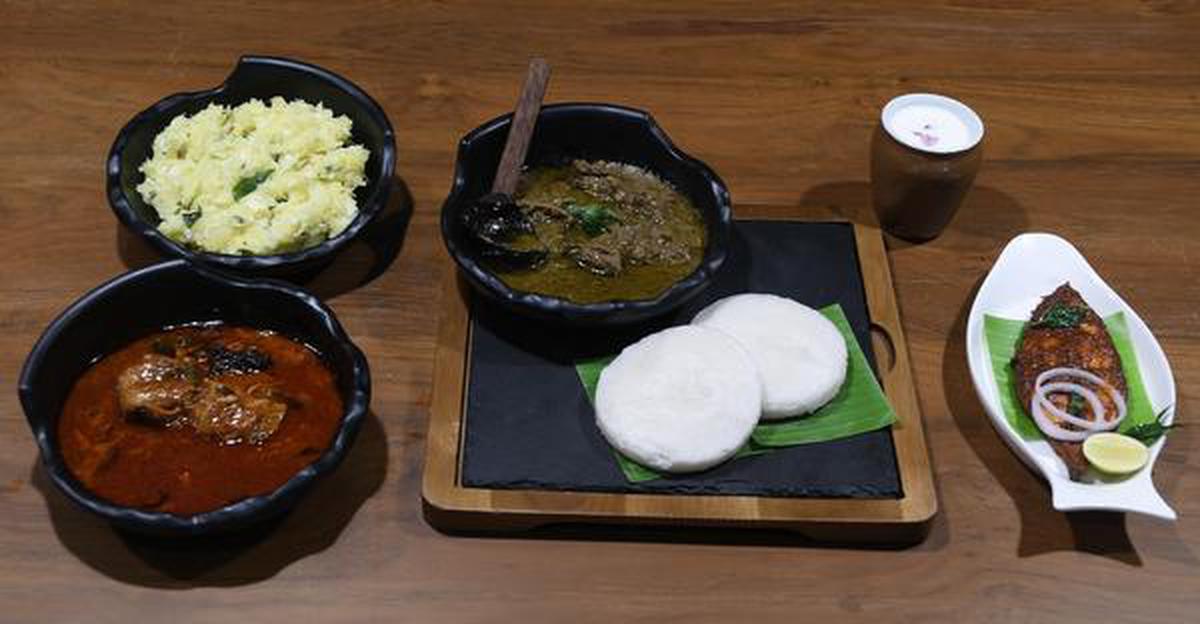 At Kappa Chakka Kandhari in Chennai and Bengaluru, Chef Regi Mathew is keeping the menu simple and local

Regi plans to give diners specific time slots so the restaurants can be sanitised between seatings. Stating that the ambience need not look clinical with the new safety measures in place, he says, “It depends on how you implement it. We have a space outside to wash your hands. We will interact less, but we don’t want to lose the charm of hospitality.”

Since the restaurant will have to close by 8 pm, he’s working on high tea and an early supper menu, featuring kanji, puttu and tapioca.

For now, Regi — like all other chefs — will need to keep menus simple and local: ingredients are difficult to source as India slowly eases its long lockdown. In the Soy Soi kitchen, Chef Peter Tseng is finding practical ways to cook Asian food with what is available in the local market. It is not just the exotic ingredients that used to be flown in from abroad that are unavailable now, Peter says. “even lemongrass and galangal, which come from Ooty, are difficult to source”. 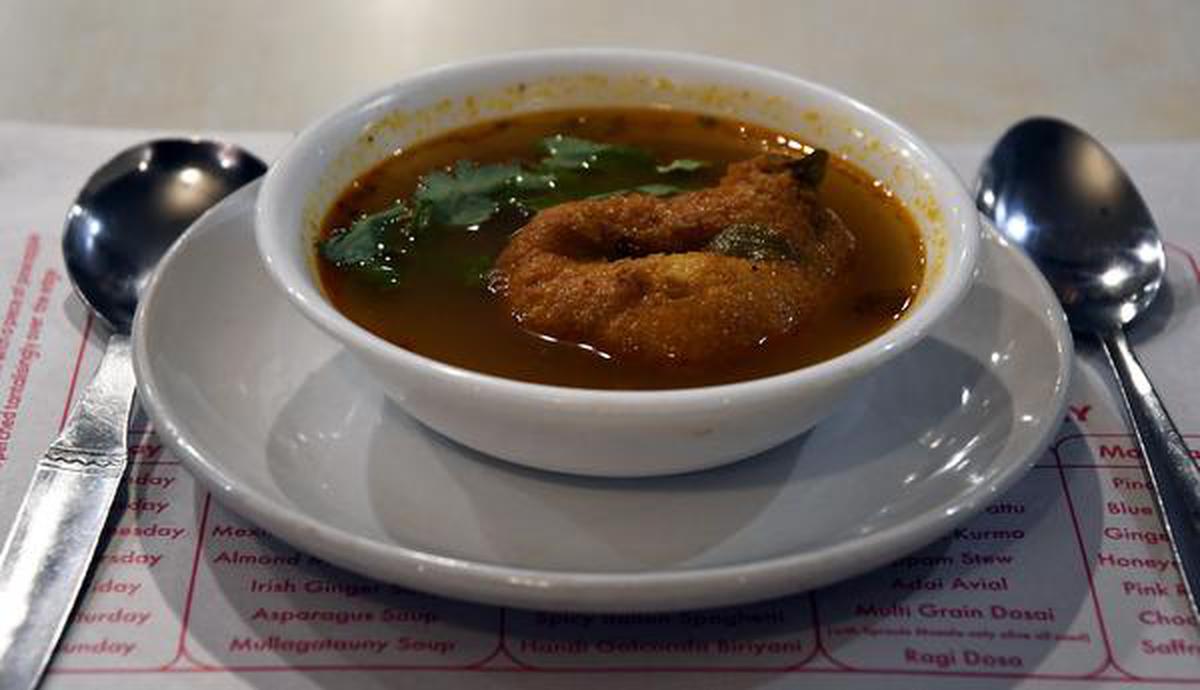 The popular rasa vada at Mathsya


Familiar comfort food has reigned through the pandemic. At Mathsya, Chennai’s iconic Udipi restaurant, Ram Bhat says that its most popular dish for delivery through lockdown has been rasa vada. “People tell me it’s a miracle food,” he laughs. He is not ready to open yet, as only about 10% of his staff is in place now. “Many of them have been with us for 30 and 40 years,” he states, adding that the biggest challenge for the 100-year-old restaurant is going to be finding ways to retain these cooks and servers’ jobs.

“We have three generations of loyal customers backing us, and asking me to reopen, but I don’t know how much longer we can keep going if the situation doesn’t improve,” Ram says. “I am spending the next three days talking to people about gadgets to help us reopen. UV rays to sanitise tables, HEPA filters for the air, new ways to sanitise vegetables: I am not an authority on any of this. But I am doing my best.”

Meanwhile for the past few months, despite the restaurants being closed, Ram still visits Mathsya’s three branches everyday. “I have no work! But what will I do sitting at home?” he says. “At least this way, I can have a filter coffee.”