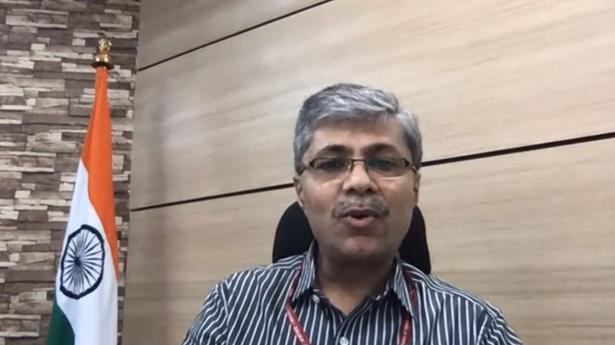 
Delegates from non-Hindi speaking States, including a group of 37 government yoga and naturopathy practitioners from Tamil Nadu, were in for a rude shock during a virtual training of master trainers organised by the Union Ministry of AYUSH earlier this week, with Hindi being predominantly used through the three-day programme.

Their repeated attempts to share their concerns over the loss of communication and information with the organisers elicited no response.

Further, when addressing the participants on Thursday, the last day of the training programme, Secretary of the Union Ministry of AYUSH Vaidya Rajesh Kotecha said on camera that he would speak only in Hindi as he was not fluent in English. Participants who wanted English, “could leave”, he added.

Mr. Kotecha has since claimed that the video of his comments was manipulated. He said while the web link for the programme was sent to 350 invited participants, 430 participants turned up and his address was disrupted by “hooligans”.

The Tamil Nadu Directorate of Indian Medicine had selected a government yoga and naturopathy practitioner from each district for the national-level training for the AYUSH Health and Wellness Centres, organised by the Morarji Desai National Institute of Yoga (MDNIY).

Kanimozhi asked ‘are you Indian?’ | CISF to deploy personnel with ‘working knowledge of local language’ at airports

“The idea behind the programme was right but the approach was not. It was primarily to promote yoga at primary health centres. Though it was a national-level programme, they spoke only in Hindi and we do not know the language. We sent repeated messages to the organisers on the chat box asking them to speak in English but they did not accept saying they were fluent only in Hindi,” one of the participants from Tamil Nadu said.

Only a handful of speakers handling the sessions spoke in English, often in bilingual (English and Hindi) that was time-consuming, the participant said.

“At the end of sessions, we had questions for the speakers. But only other participants fluent in Hindi were allowed to pose three or four questions,” he added.

Speaking to The Hindu, Mr. Kotecha said, “I was to give a 10-minute introductory speech and began speaking in Hindi, making it very clear that I would be speaking in both languages — Hindi and English. A bunch of hooligans, who had come in as participants in the webinar, started shouting, disturbing the speech and demanded that only English be spoken.”

Kanimozhi asked ‘are you Indian?’ | Kumaraswamy lashes out at ‘Hindi politics’

The official said he had requested the participants to stop disrupting the programme and leave. “They have manipulated the video and have sabotaged the entire educational programme,” he alleged.

When one of the participants from the State emphasised that yoga and naturopathy were part of a single system of medicine under the Ministry and should not be separated, the Secretary allegedly called the remark a “nuisance” and threatened the participant that “appropriate punishment” would be considered against him by writing to the Chief Secretary.

Also read | After Kanimozhi episode, Chidambaram says he has faced taunts too

The participants also said they were shocked and disappointed that there were no yoga and naturopathy doctors (BNYS graduates) among the trainers. They called for rigorous selection criteria for the experts, stressing that only qualified and experienced persons with relevant clinical expertise and research background be brought in.

The associations said this was “an unplanned, unprofessional, poorly coordinated activity by the MDNIY, New Delhi, which has shown its inefficiency in conducting programmes of national importance”.

(With inputs from Bindu Shajan Perappadan)