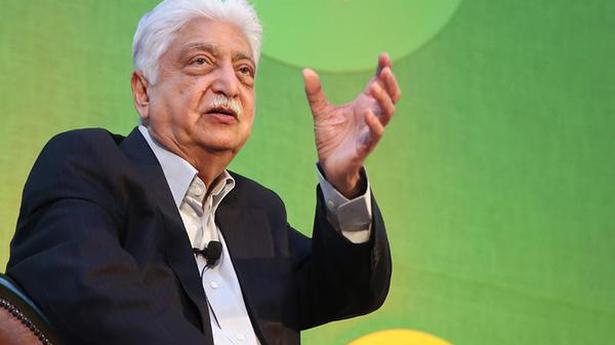 Azim H. Premji, former chairman and managing director of Wipro, and his wife have moved the Supreme Court against the Karnataka High Court’s refusal to quash a trial court summons based on a “mischievous” private complaint alleging breach of trust and corruption in the merger of three companies with an Azim Premji Group company.

The petition, filed through advocate Mahesh Agarwal, said Napean, Regal and Vidya are private companies and have been promoted, owned and controlled by the Azim Premji Group since their inception in 1974. It submitted that Hasham, the company with which the three were merged in 2015, is also part of the Azim Premji Group.

“The only assets of each of these companies are the shares held in other two companies and the shareholding in Wipro Ltd. (an Azim Premji Group company) — even these assets were transferred by the Azim Premji Group to the company from time to time. No other investment has been made by any other third person in the said companies,” the petition said.

The petitioners were directors in the three companies until the date of merger. The control and management of Napean, Regal and Vidya remained with Mr. Premji, though the shares of the companies were interlocked after 1980.

Mr. Premji said the three companies were united in accordance with the Companies Act. The High Court had sanctioned the Scheme of Amalgamation after all procedures were followed, including notice to the Regional Director of the Ministry of Corporate Affairs and the Official Liquidator. Neither the trial court nor the High Court conducted any inquiry or asked for the Scheme of Amalgamation to be placed on record.

The “malafide” criminal complaints filed by India Awake for Transparency in 2017 said the three companies “belonged to nobody and therefore belonged to the government”. Mr. Premji said the accusation was mischievous.

“The fact that these three companies were part of the Premji group was declared to all government authorities and was also in public knowledge. Public disclosures of the same have been made in documentation filed with authorities like SEBI/stock exchanges, the Ministry of Corporate Affairs, etc.,” he submitted.

The complaints misled the trial court into taking cognisance and suppressed information from the courts, the petition contended.

“The Scheme of Amalgamation sanctioned earlier by the Karnataka High Court, which forms the sole basis of the present complaints, was deliberately suppressed by India Awake for Transparency. It [the scheme] reflects the complete purpose, financial structure, shareholding of the transferor and transferee companies, the accounting treatment and the terms on which the amalgamation of companies occurred, which, if brought to the notice of the courts, would have shown that not even a prima facie case was made out under the complaints,” it argued.

Mr. Premji said the complaints were motivated by personal vendetta. He said India Awake for Transparency “is being used by one Mr. R. Subramanian as a corporate façade to file frivolous litigation against Mr. Premji and his affiliates”.

The petition said Hasham had earlier taken Mr. Subramanium to court for a loan default and dishonoured cheques.

The Hindu Explains | Where are the funds collected through cess parked?