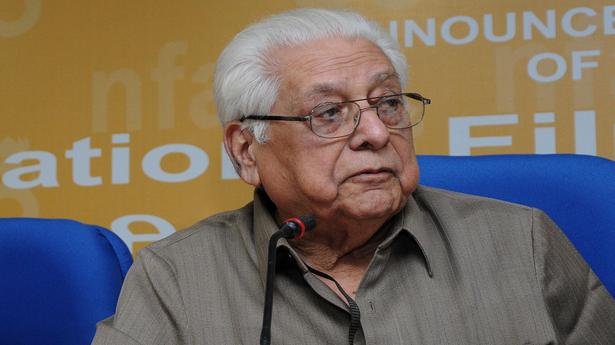 Basu Chatterjee, who died in Mumbai on Thursday at the age of 93, had a great ear for music. Most of his 40-odd films had superb music and many songs from them continue to delight, decades after they were released. Though he shied away from the typical Bollywood style of filmmaking, there was one aspect of it that he retained in his films — space for songs.

And his films had gorgeous songs. Take for instance, Chitchor. It was a lovely romantic comedy that had a splendid script (by Chatterjee himself), refreshing visuals of the hilly areas of Maharashtra, fine performances from the talented cast led by Amol Palekar and Zarina Wahab, but it was probably the songs that ensured the film’s immortality more than anything else.

It had four songs, written and composed by Ravindra Jain. All became hits. All were sung by K.J. Yesudas (two of them in the company of Hemlata).

Jab deep jale aana… remains perhaps Yesudas’s most popular Hindi song. The semi-classical composition, in Raga Yaman, helped the music fans on the northern side of Vindhya, discover the rare gift of the singer, who had already established himself as the finest voice in south Indian cinema.

The ease with which he scaled the difficult notes of the song and the sheer magic in his voice won him hundreds of thousands of new admirers instantly. Hemlata played the perfect foil to him, as she did in the other beautiful duet of Chitchor – Tu jo sur mein…

It was Yesudas’s second film with Chatterjee. The first was Chhoti Si Baat, which was released early in the same year, 1976. It, in fact, was his first release in Hindi.

Salil Chowdhury’s composition Jaaneman jaaneman tere do nayan… was a hit too (it was a duet with Asha Bhosle).

It was for the second time that Chatterjee was entrusting his fellow-Bengali with the task of composing music. Their first film together, Rajnigandha, had actually better music. Lata’s Rajnigandha phool tumhaare… is hauntingly beautiful, while Kai baar yuhin dekha… won Mukesh his first – and only – National Award.

That Kishore Kumar never won a National Award may be one of the great ironies of Indian cinema, but it was the gifted singer who gave Chatterjee the first big hit song. It came in the director’s second film, Piya Ka Ghar. Yeh jeevan hai…, tuned by Laxmikant Pyarelal, is, in fact, among Kishore’s finest songs. The film also contained two other melodies – Yeh zulf kaisee hai... (Rafi) and Piya ka ghar… (Lata).

It wasn’t only established composers like Laxmikant-Pyarelal that Chatterjee worked with. He brought the best out of music directors like Shyamal Mitra, who came up with Chori chori ayeeyo Radhe… (Asha) and Tere mere liye... (Yesudas) for Safed Jhoot, which was released in 1977.

The same year saw Chatterjee making Swami. It had music by Rajesh Roshan, whose reworking of the famous Thumri, Ka karoon sanji aaye balam…, gave Yesudas one of the best songs of his career.

The film also had other melodies like Pal bhar mein kya… (Lata) and Yadon mein woh... (Kishore) and Aaj ki raat… (Yesudas and Asha). The director and the composer joined hands for another film that year, Khatta Meetha, which had Kishore and Lata rendering Thoda hai thode ki zarurat…

The following year saw Chatterjee collaborating with the legendary Jaidev. The result was one of the more underrated albums in Hindi cinema, Tumhare Liye.

Only Lata’s Tumhein dekhti hoon... may have climbed the charts, but the songs by her sisters, Bansuriya man har… (Asha), More taras taras… (Usha) and Mere hathon mein... (Asha) as well as her own Bole Radha Shyam...would please the ear as much.

A year later Chatterjee worked with another legend of Indian music, Hemant Kumar. Do Ladke Dono Kadke had a great duet by Asha and Yesudas, Chanda ki doli mein… There was a fine solo by Yesudas, too – Kise khabar kahaan dagar…

That year, 1979 in fact was the most prolific of Chatterjee’s career, as he directed six films. Two of those had music by R.D. Burman. Manzil saw the genius composing the timeless Rim jhim gire saavan... (sung separately by Kishore and Lata).

R.D.’s compositions in Ratnadeep may not have become as popular, but they are excellent nevertheless. Kabhi kabhi sapna lagta hai… (Kishore and Asha) and Aisa ho to kaisa hoga… (Asha) would not disappoint you, if you haven’t heard them yet.

Chatterjee’s other film of the year saw him reuniting with Rajesh Roshan for Baaton Baaton Mein. Kishore made the occasion unforgettable with one of his least celebrated songs, Kahan tak yeh mann…, which was also among the finest written by lyricist Yogesh, who passed away last week.

Yogesh also wrote two of the finest songs from the films made by Chatterjee in the 1980’s: Kaise din jeevan mein… (Kishore) and Halke halke aayi... (Lata) were tuned by Bappi Lahiri for Apne Paraye.

The music in Chatterjee’s films are not just enchantingly melodious, but wonderfully varied as well.