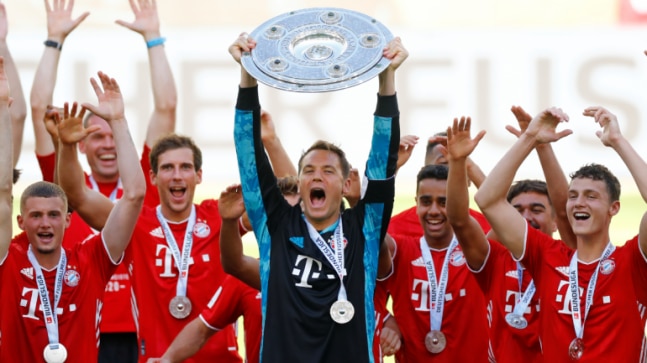 The Bavarians, who have matched a club record of 25 matches in all competitions without defeat and are unbeaten in the Bundesliga in 2020, went ahead in the fourth minute with Kingsley Coman netting from Thomas Mueller’s 21st assist, a league record.

Bayern Munich’s Manuel Neuer celebrates with the trophy and teammates after winning the Bundesliga. (Reuters Photo)

The Bavarians, who have matched a club record of 25 matches in all competitions without defeat and are unbeaten in the Bundesliga in 2020, went ahead in the fourth minute with Kingsley Coman netting from Thomas Mueller’s 21st assist, a league record.

Mickael Cuisance then rifled in from 25 metres for a sensational goal in the 37th and the 20-year-old Frenchman earned a penalty, which resulted in Joshua Guilavogui being sent off with a second booking. Bundesliga top scorer Robert Lewandowski converted it for his 34th goal of the season.

The Polish striker earned his fifth Bundesliga top scorer award and his third in a row. Mueller then made it 4-0 in the 79th minute as Bayern took their season goal tally to 100, one less than the league record set by them in the 1971-72 season.

For Wolfsburg the defeat denied them a direct Europa League group stage spot, leaving them in seventh place.

The bizarre trophy ceremony in the empty Wolfsburg stadium was a reflection of the season that was interrupted for more than two months in March due to the COVID-19 pandemic.

With no families, fans or friends in the stands to share their joy, the Bayern players were left to celebrate lifting the sparkling trophy with a handful of club bosses in the stands.

Bayern can win more silverware next week with the German Cup final against Bayer Leverkusen. They are also still in the Champions League

Andrej Kramaric became the first Hoffenheim player to score four goals in a Bundesliga game, overwhelming Borussia Dortmund with a one-sided 4-0 away victory on Saturday.

The Croatian striker, his club’s top scorer this season, took his campaign tally to 13 as Europa League-bound Hoffenheim moved above VfL Wolfsburg to finish in fifth place on 52 points.

Dortmund were already confirmed as runners-up to Bayern Munich, but after this embarrassing home defeat finished 13 points adrift of the champions.