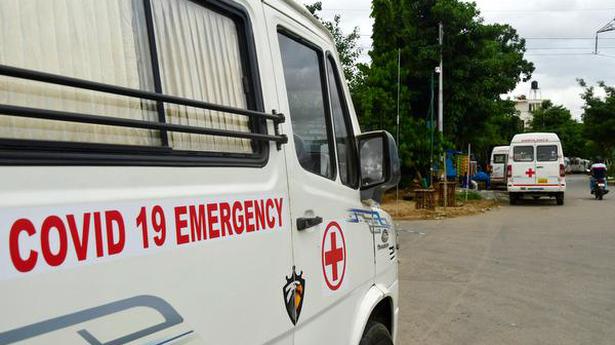 The Bruhat Bengaluru Mahanagara Palike (BBMP), which has deployed around 700 ambulances for the eight zones, needs of the police and for areas under Bengaluru Urban district, is now tracking its fleet to ensure maximum efficiency.

The fleet includes Basic Life Support (BLS) ambulances, Tempo Travellers (TTs) converted to BLS ambulances and regular Tempo Travellers. They will be monitored and tracked by an Ambulance Despatch Control Centre, which the civic body has set up.

According to officials, the active tracking of ambulances started around a fortnight ago. With this system, the BBMP hopes to bring down the number of complaints of delay in ambulances reaching patients.

“We can track the movement of vehicles in real time. The drivers have been directed to download the tracking app on their phones,” said a senior civic official.

BBMP’s Special Commissioner (Health) D. Randeep told The Hindu that the dashboard at the control centre is being linked to the COVID-19 Hospital Bed Management System. “This second level integration will happen in a couple of days, following which the loop will be complete,” he said.

Explaining how the vehicles are tracked, he said that the drivers get an SMS on the COVID-19 positive patient to be picked up and the hospital they are to be taken to. “Once the patient is picked up, the driver has to indicate this on the app. He has to update the app after the patient is dropped off at the designated hospital,” Mr. Randeep added.

With everything online, the BBMP will be able to track when the patient was picked up, when he/she was admitted in the designated hospital, apart from tracking the payment of bills.

“The entire system is transparent. We began actively tracking vehicles on the Ambulance Despatch Control Centre over the past two weeks,” he added.

Positive about flying? Airlines look to Covid tests that give results...

From Pakistan to the IPL via USA: The journey of KKR’s...