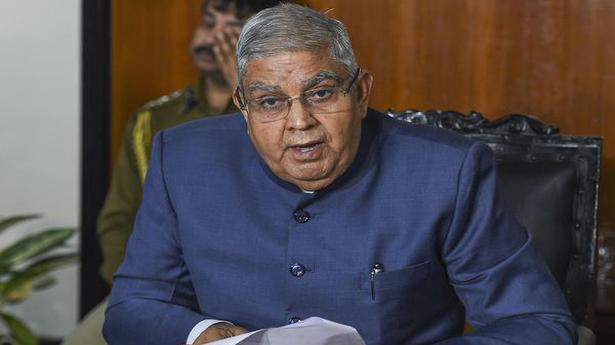 Senior ministers of the State government along with several party MPs took to social media and made public statements against the Governor.

Mr Dhankhar responded by saying that senior leaders have taken to “tweeting similarly rather than apologise for shaming our State by such barbaric acts of dragging human bodies callously by pair of tongs”.

What triggered the accusations were tweets by the Governor earlier in the day, where he raked up the issue of the video outside a city crematorium where civic workers are seen mishandling the bodies and called for an “immediate apology to society at large”.

“Such uncivilised and uncouth approach in disposal of dead bodies @MamataOfficial came for severe condemnation all over. Our age old traditions were mercilessly decimated by repeated dragging of dead bodies by iron hook. Urge immediate apology to society at large,” Mr. Dhankhar tweeted, tagging the Chief Minister. The Governor said the Commissioner of the Kolkata Muncipal Corporation ( KMC) had updated him “about sordid saga of dead body disposal — factual details about all 14 dead bodies right from admission to hospital till disposal, as also lapses committed and those involved to be rendered”.

The video surfaced two days ago showing decomposed bodies being dragged into a Kolkata Municipal Corporation van in broad daylight. The video was allegedly shot outside the Garia Crematorium under Bansdroni Police Station where locals objected to the cremation of several decomposed bodies. Some locals claimed that the bodies could be of victims of COVID -19. The administration has clarified that the bodies were not related to COVID-19 patients and principal of the State-run NRS Medical College and Hospital has written to the Kolkata Police saying that the video was of unclaimed bodies.

Senior TMC Minister Partha Chatterjee said the West Bengal government is constantly working for the people of Bengal and “all we expect from the Honorable Governor is to help us by not spreading Fake News and misinformation”.

State Urban Development Minister and chairman of the board of administrators of KMC Firhad Hakim also said while the government is working for people, “ others” are just interested in spreading “fake news”.

Later in the day while speaking to journalists, Mr. Hakim said the Governor is speaking in the language of opposition parties and no other Governor had targeted the State government on twitter.

Most of the TMC leaders shared photos of a letter written by the Principal of the NRS Medical College and Hospital.

Notwithstanding the allegations of TMC leadership the Governor in his tweets had not mentioned that those bodies in the video were of COVID-19 patients. Other leaders of the TMC including MP Mahua Moitra and Derek O Brien also targeted the Governor in course of the day.

West Bengal Home Department also issued a series of tweets saying that the Government of West Bengal respects the credo of dignity at death while handling the COVID pandemic.

“The recent misinformation drive to project an isolated incident of a particular agency’s handling of some unidentified and decomposed dead bodies lying (post accidents etc.) in a morgue has no relationship whatsoever with the current pandemic. This has been communicated in writing and in person by most senior state officials even to Hon’ble Governor,” the department said.

The State BJP leadership came to the rescue of the Governor with State president Dilip Ghosh saying that targeting the Governor on social media has become the favourite pastime of TMC leadership.

Stay on publication of book on Asaram quashed

Over 3.8 lakh companies struck off under companies law in 3...