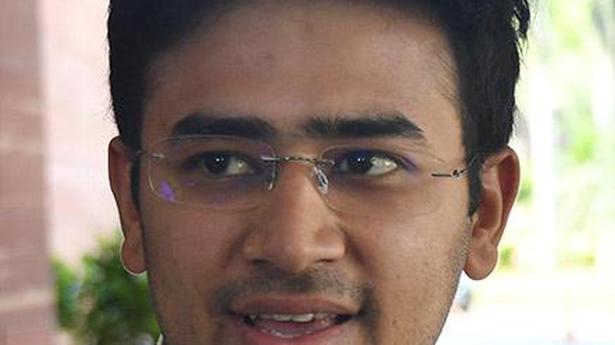 The terrorist groups want to use the city as an ‘incubation centre’ for terror activities, says the BJP MP

Bengaluru has become an epicentre of terror activities, BJP MP Tejasvi Surya claimed on Sunday and said he had requested Union Home Minister Amit Shah to set up a permanent division of the National Investigation Agency (NIA) in the city.

A day after becoming the president of the BJP’s youth wing, Mr. Surya said many terror modules have been busted in Bengaluru, the Silicon Valley of India, in the recent past. The terrorist groups want to use the city as an “incubation centre” for terror activities.

Mr. Surya said he had met Mr. Shah at the latter’s residence two days ago and emphasised the need to have a well-equipped and sufficiently staffed NIA office to mitigate terror-related activities in Karnataka.

“The Home Minister has assured that he will direct officials to establish a permanent station house manned by an officer of the rank of the SP at the earliest,” Mr. Surya said.

“In last few years, Bengaluru, the Silicon Valley of India, has become epicentre of terror activities. It has been proved through many arrests and sleeper terror cells busted by the investigative agency in the city,” Surya, who represents Bengaluru South in Lok Sabha, told reporters here.

“It is a matter of grave concern that NIA investigations into the DJ Halli and KG Halli mob violence in August have indicated that many terrorist organisations are using Bengaluru as their incubation centre for carrying out anti-India activities, he said.

Over 3,000 people went on a rampage on August 11 torching the residences of Congress MLA R Akhanda Srinivasa Murthy, his sister Jayanthi and DJ Halli and KG Halli halli police stations in Bengaluru.

The violence broke out over an alleged inflammatory social media post by the nephew of the Congress MLA.

Mr. Surya said there are reports that the NIA does not have sufficient infrastructure and human resources for conducting investigations. The NIA is currently operating with skeletal staff and that too from Hyderabad with only a camp office in Bengaluru.

Bengaluru being the financial nerve centre of south India, it is vital to keep the city safe from all terrorist and anti-India organisations and their activity, he added.

On his new responsibility as the head of the Bharatiya Janata Yuva Morcha (BJYM), Mr. Surya said his first visit will be to poll-bound Bihar to interact and meet the party’s youth wing volunteers.

“Yuva Morcha will nurture more grassroots leadership across the country. A young karyakarta (worker) like me has been given the responsibility of the national youth wing of the world’s largest political party in the world’s biggest democracy and in the world’s youngest country. This is possible only in the BJP,” he said.

Underlining that BJYM will continue to be a platform for all youngsters of the country, Mr. Surya said he feels the strongest leaders come from weakest sections of the society. And he wants to ensure that BJYM will be their platform.