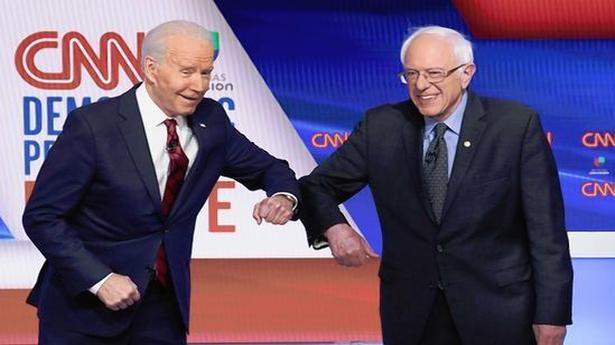 Spokesman Mike Casca says the Vermont senator will hold a socially distanced, outdoor rally on Saturday in Lebanon, New Hampshire which will be capped to keep crowds from growing too large

Bernie Sanders is returning to in-person campaigning for the first time since the start of the coronavirus pandemic in March, heading to the battleground states of New Hampshire and Michigan to promote Joe Biden and sooth any lingering tensions between the Democratic Party’s progressive and centrist wings.

Spokesman Mike Casca says the Vermont senator will hold a socially distanced, outdoor rally Saturday in Lebanon, New Hampshire which will be capped to keep crowds from growing too large. On Monday, Mr. Sanders will host a drive-in rally in Macomb County, Michigan — a Detroit suburb that voted Republican in 2016 and was instrumental in clinching the White House for President Donald Trump.

Some of Mr. Sanders’ top advisers and supporters later formed joint task forces with their counterparts from Biden’s camp to hammer out agreements on major policy issues that were reflected in the Democratic Party platform. Also, high ranking Sanders campaign leaders have formed two Super PACs to promote Biden — despite Sanders personally opposing outside money in politics.

Mr. Sanders hitting the road again comes as Mr. Trump has increasingly sought to paint Biden as beholden to progressive activists and the radical left. Mr. Biden, who won the primary largely as a moderate, says he wants to build a broad coalition of support from all Democrats and as many Republicans as possible — but has noted that he doesn’t support some of Mr. Sanders’ most progressive ideas. That includes not embracing fully government-funded health care under a Medicare for All plan, nor a sweeping package of climate change-fighting measures known as the Green New Deal.

Mr. Biden has said he beat the socialist referring to Mr. Sanders. Amid sharp criticism from Mr. Trump about embracing some of Mr. Sanders’ policies during the first presidential debate in Cleveland on Tuesday, the former vice president noted, “Right now, I’m the Democratic Party”. Mr. Sanders reiterated on ABC’s The View this week that Mr. Biden doesn’t share his support for Medicare for All. “He does not agree with me, though I wish he did,” Mr. Sanders said.

Even before his scheduled trips, Mr. Sanders spent months staging virtual town halls and other events around the country on Mr. Biden’s behalf. Since the Democratic convention in August, he’s held more than a dozen online rallies, targeting voters in Kentucky, West Virginia, Iowa, Wisconsin, Colorado, Texas, Vermont, Pennsylvania and Michigan, as well as virtual events focused on Latino and rural voters.

Mr. Sanders also endorsed 76 candidates for elected office around the country this cycle and saw three-fourths of those win. Sanders argues that Trump poses an existential threat to American democracy, warning that the president may use election results that could be delayed by high volumes of mail-in ballots cast amid the pandemic to declare victory illegitimately.