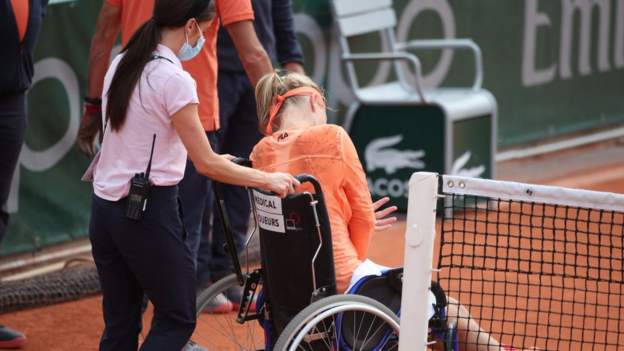 Fifth seed Kiki Bertens left the court in a wheelchair after her victory over Sara Errani before being accused by the Italian of exaggerating her injury.

The Dutchwoman was in tears with cramps after her 7-6 (7-5) 3-6 9-7 win over the 2012 finalist, who quickly departed without tapping racquets at the net, and also shouted an obscenity.

“I don’t like it when someone is joking on you,” Errani said.

“I don’t think she had a good attitude on court.”

Errani, who three times failed to serve out the match and squandered a match point at 6-5, added: “One hour she has an injury and goes out of the court on a chair and now she is perfect in the restaurant. I don’t like these things, I’m sorry.”

Asked if she thought Bertens was exaggerating, she replied: “Yes.” And asked if the Dutchwoman needed the wheelchair, she said: “Ask her.”

Bertens, 28, left the court screaming in pain after visibly struggling physically towards the end of the three-hour-11-minute match, which had featured 24 breaks of serve.

“It was a rollercoaster, to be honest. Physically I didn’t feel great, I was cramping, I think everyone could see that,” the world number eight said.

“But it was weird because I didn’t feel really tired but I was sweating and I was cold, so I don’t know what it was, maybe a bit of tension in the body. I kept on fighting and I still don’t know how I won.

“I was cramping left leg, right foot, both hands, a lot of places.”

Bertens said she could understand the frustrations of Errani, who had so much trouble with her ball toss that resorted to several under-arm serves during the match, and was not taking it personally.

“For me she can say whatever she feels like,” she said. “Maybe I should take more acting classes or pursue a career in that. I’m not sure what she is thinking.

“I was in the treatment room for 45 minutes with the physios and after 30 minutes I stopped cramping so maybe she should have been in there and seen what happened.”

Errani, who had also appeared to mock Bertens’ cramping, later said the obscenity at the end of the match was not aimed at her opponent and was just something that Italians say a lot when they are angry.