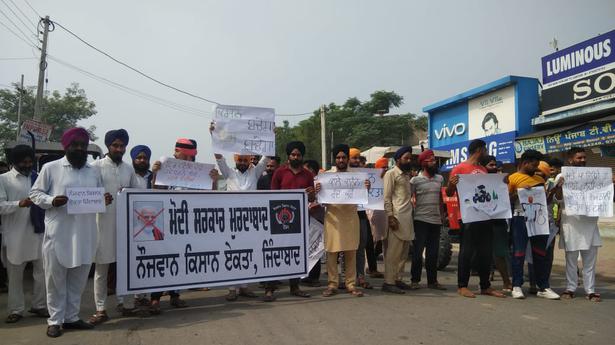 Various farmer groups have called for a nationwide shutdown on Friday against three farm bills, which were passed by both houses of Parliament during the Monsoon session and await presidential assent.

Over 250 farmer and farm-worker organisations, under the umbrella of All India Kisan Sangharsh Coordination Committee (AIKSCC), have given a call for the ‘Bharat bandh’. Opposition parties, including Congress, has voiced support for the protest.

The Congress has always fought for farmers and labourers and will continue doing so, Mr. Baghel said while addressing a press conference in Nagpur, Maharashtra, on the issue of farm Bills passed in Parliament.

Three farm Bills — the Essential Commodities (Amendment) Bill, the Farmers’ Produce Trade and Commerce (Promotion and Facilitation) Bill (commonly referred to as the APMC Bypass Bill), and the Farmers (Empowerment and Protection) Agreement on Price Assurance and Farm Services Bill — were cleared by Parliament amid protests from the Opposition. We discuss the implications of the controversial Bills.

These policies have been thought through. The National Farmers Commission was set up when Atalji [former Prime Minister Atal Behari Vajpayee] was Prime Minister; the first report came around 2004; the fourth [report] in 2006. Not only the recommendations of this Commission but also that of the Swaminathan Commission were gone through threadbare and, since I was Minister of State for Agriculture in the last government, I can say this with responsibility that I myself went through all these recommendations. The recommendations were in multiple stages, to reflect the change in India’s status from a food deficit to a food surplus nation. Right from land reforms, which we worked on first with the Assured Income Purchase Bill and Farmer Producers Organisations, were all part of it.

We have to plan ahead, what we can do today with conviction, tomorrow we may have to do under compulsion. The Bills are based on recommendations of Commissions set up by successive governments and I would advise the Opposition to read the Bill before stoking fears that farmers will suffer through these much-needed reforms. The assured income via contracts, the rationalisation of price if there is a spike in commodity rates, the time-bound redressal mechanism are all safeguards.

Opinion | It’s a no green signal from the farm world

In a virtual rally, the Prime Minister blamed the Opposition parties for misleading farmers about the three Bills on agriculture, in Parliament. While the Opposition may have taken up the cudgels recently, the fact is that farmers have been protesting against the Bills ever since it was promulgated as ordinances in June. These are The Farmers’ Produce Trade and Commerce (Promotion and Facilitation) Bill, 2020, the Farmers (Empowerment and Protection) Agreement of Price Assurance and Farm Services Bill, 2020, and the Essential Commodities (Amendment) Bill, 2020. The resignation of Food Processing Industries Minister (and Shiromani Akali Dal MP), Harsimrat Kaur Badal, from the Union Cabinet, and dissenting voices from various mass organisations affiliated to the Rashtriya Swayamsevak Sangh suggest that the opposition to the Bills may not be politically motivated; rather, it may be a reflection of the genuine concerns of farmers.

Several reforms at the level of the central government as well as at the State level have been introduced and welcomed by farmers. However, in this particular case, the issue is not about the Bills; it is also about the process of their introduction. As was pointed out by Ms. Badal, the government has failed to have or hold any discussion with the various stakeholders including farmers and middlemen. This is also true when it comes to consultation with State governments even though the subject of trade and agriculture are part of subjects on the State list. The attempt to pass the Bills without proper consultation adds to the mistrust among various stakeholders including State governments. While the lack of consultation has certainly added to the element of mistrust between the government and farmers, some of the issues raised by farmer organisations are also genuine; recent trends in agricultural prices and incomes have only confirmed these fears.