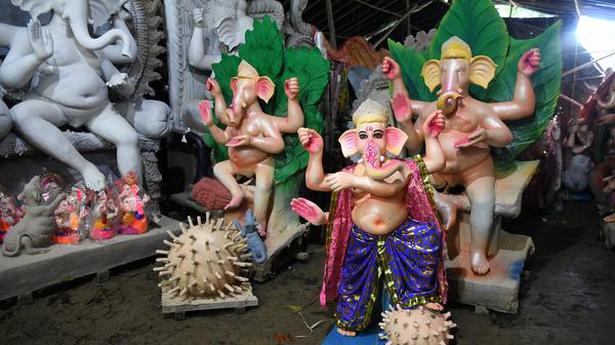 Every monsoon, Bharat Singh Prajapati’s workshop bustled with activity — workers from Bengal moulding clay idols, his four children lending them a hand, and customers streaming in and out. But restrictions on public gatherings this year owing to the COVID-19 pandemic have left a numbing impact on the potter of 25 years.

Ganesha Chaturthi has passed, yet the once-soothing sight of tens of two-feet idols and scores of taller unfinished ones, some left half-coloured and others needing a final touch, at his makeshift workshop on a temple premises in New Market here piques him. “I wish I had gleaned my children from our traditional occupation earlier, so they could have picked something else. The pandemic has stolen away our identity,” said Mr. Bharat, tears rolling down his cheeks.

Restrictions on gatherings, including religious ones, during the pandemic have gnawed away at the livelihoods of Bhopal’s nearly 800 potter families, who make the most around Ganesh Chaturthi and Durga Puja, as the demand for clay idols has crashed. Worse, the government has placed a cap of two-feet on idol height too late, just a week ahead of Ganesh Chaturthi, by when potters had taken orders in advance, invested in raw material and even readied a few idols, now left to decay.

The faded colours of a few finished taller idols, due to corrosion from moisture over days, resemble the grim prospects confronting Mr. Bharat, who sits idle at the temple’s entrance gate, wondering how to repay ₹4 lakh in debt. Anticipating a normal season bringing in ₹2-3 lakh profit, he had taken a loan of ₹1 lakh at 10% interest and even mortgaged his house and wife’s jewellery to buy raw material.

“I have been able to sell just 10 of the 120 idols we made. How will I repay the loan?” he asked. He cancelled another 50 orders, but prospective buyers, munificent enough, did not ask for the ₹20,000 advance back. “My family is having just namkeen with puffed rice to survive,” he said.

“Thousands took part in the BJP’s three-day membership drive in Gwalior-Chambal recently, but no one questioned them. Are COVID-19 safety norms meant only for the poor?” asked Mr. Prajapati, wondering why idol tents couldn’t be allowed with precautions and physical distancing. He now pins his hopes on the upcoming Durga Puja, and on selling diyas ahead of Diwali.

In the Budhwara area, Mohan Lal Prajapati, among the city’s oldest potters, has sold just 35 of the 100 idols. “Home Minister Narottam Mishra two months ago told us we could go ahead with making idols, even taller ones, but he later restricted them. This is a betrayal of sorts,” said Mr. Mohan, who has made₹70,000 this year so far instead of the usual ₹2-2.5 lakh.

Yet, Mr. Mohan is desperate to sell the remaining idols, even at a loss. With most customers this time preferring smaller and cheaper plaster of Paris (PoP) idols for their homes, he is compelled to sell the two-feet idols readied for ₹1,000 each for half the price. Further, he earlier paid ₹3 lakh in advance to 20 sculptors in West Bengal, who arrive each season to his workshop, but not this time, owing to transport restrictions and reduced demand.

Transport restrictions have also made raw material costlier. Ajay Prajapati bought a trolley of clay for ₹6,500, twice the usual cost. “The irony is that while wine shops, malls and restaurants are open, public gatherings are being restricted,” said Mr. Ajay, a member of the Murtikar Matikala Sangh, a group of sculptors. He said potters would protest outside the Chief Minister’s residence soon, demanding compensation.

Meanwhile, even small-scale potters selling PoP idols smaller than two feet stare at losses, though much less. From a roadside shed, Munni Bai could sell just half the idols she procured for ₹70,000 from Itarsi, 90 km away. The alternative of selling earthen pots hasn’t been lucrative either. “The lockdown was imposed in summer, the peak season for us,” she explained.

PM’s portrait on paper made of water hyacinth