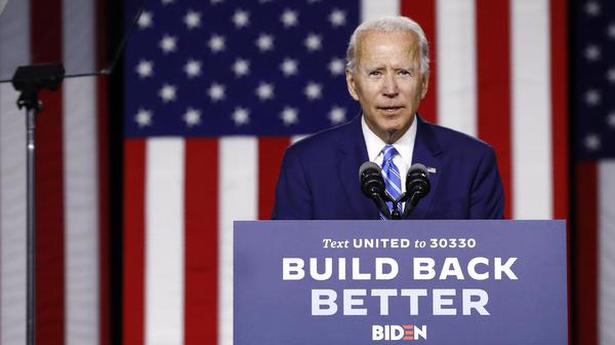 Democratic presidential nominee Joe Biden has unveiled a $2 trillion proposal to boost investment in clean energy and combat the global warming as he pledged to rejoin the historic Paris agreement on climate change if elected in the November elections.

U.S. President Donald Trump in 2017 withdrew the United States, the world’s No. 2 emitter of greenhouse gases behind China, from the 2015 Paris Climate Agreement that brought countries together to mitigate global warming, saying it was too costly.

Mr. Biden has said he will return the U.S. to a leadership role on climate change, assertively re-entering the United States in future climate negotiations to advance the goals of the Paris Climate Agreement.

We’re going to reverse Mr. Trump’s rollbacks of 100 public health and environmental rules — and then forge a path to greater ambition. We’re going to get back into the Paris Agreement — and back into the business of leading the world, Mr. Biden said in a major policy address on climate change, which he said poses a serious threat the mankind.

Mr. Biden will spend $2 trillion over four years to significantly escalate the use of clean energy in the transportation, electricity and building sectors, part of a suite of sweeping proposals designed to create economic opportunities and strengthen infrastructure while also tackling climate change.

And we’re going to lock-in progress that no future president can roll back or undercut to take us backwards again. Science requires a timeline for measurable progress on climate that isn’t three decades or even two. Science tells us we will only have nine years to act before the damage is irreversible, he said.

So my timeline for results is my first four years as president — the jobs we’ll create, the investments we’ll make, and the irreversible steps we’ll take to mitigate and adapt to climate change and to put our nation on the road to net-zero emissions by no later than 2050, Mr. Biden said.

Backward-looking politics that will harm the environment, make communities less healthy, and hold back economic progress while other countries race ahead, he said.

Mr. Biden will challenge incumbent Mr. Trump, a Republican, in the November 3 polls.

According to his campaign, Mr. Biden will launch a national effort aimed at creating the jobs needed to build a modern, sustainable infrastructure now and deliver an equitable clean energy future.

Mr. Biden will make a $2 trillion accelerated investment, with a plan to deploy those resources over his first term, setting us on an irreversible course to meet the ambitious climate progress that science demands, the campaign said.

The plan, the campaign said will create millions of good, union jobs rebuilding America’s crumbling infrastructure to lay a new foundation for sustainable growth, compete in the global economy, withstand the impacts of climate change, and improve public health, including access to clean air and clean water.

It will also create one million new jobs in the American auto industry, domestic auto supply chains, and auto infrastructure, from parts to materials to electric vehicle charging stations, positioning American auto workers and manufacturers to win the 21st century; and invest in US auto workers to ensure their jobs are good jobs with a choice to join a union.

The plan will provide every American city with 100,000 or more residents with high-quality, zero-emissions public transportation options through flexible federal investments with strong labour protections that create good, union jobs and meet the needs of these cities — ranging from light rail networks to improving existing transit and bus lines to installing infrastructure for pedestrians and bicyclists.

In the power sector, the Biden move ambitiously to generate clean, American-made electricity to achieve a carbon pollution-free power sector by 2035.

This will enable us to meet the existential threat of climate change while creating millions of jobs with a choice to join a union, it said.

At a White House news conference, President Trump slammed Mr. Biden for his announcement on rejoining the Paris agreement, which he asserted was not in America’s interest.

We would have had to do things that would have been unbelievably destructive to our country, including the possible closing of 25% of our businesses, he said.

Think of that, and it was going to cost us hundreds and hundreds of millions of dollars for the privilege of being involved in the Paris Climate Accord, and you just have to look at what took place this year in Paris and France where money was being sent to countries all over the world, and the people of France didn’t want to take it, and they didn’t, and they did a lot of rioting, Mr. Trump said.

They had their taxes raised, we would have had to raise our taxes, and it was a disaster. I’ve been given a lot of credit for what I did there took a certain amount of courage, I guess because sounds so nice the Paris Climate Accord, but it wasn’t good for us at all, he said.