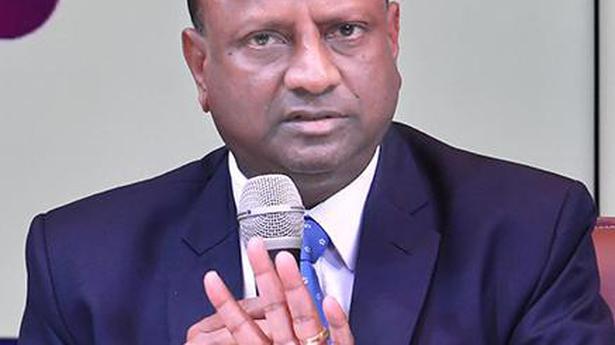 “Out of 100 transactions at SBI, only nine transactions are being made at branches. While transactions at ATMs at the time of demonetisation stood at about 55%, these are down to about 30% now. Mobile banking has risen to to 55% now,” Mr. Kumar said, addressing the seventh G. Ramachandran Memorial Lecture organised by the Southern India Chamber of Commerce and Industry.

According to him, transactions via digital banking had risen due to the lockdown. “During the pandemic, SBI delivered all its services without any interruption. Mobile transactions were almost on a par with Internet banking,” he said.

“COVID has brought in a new paradigm. Earlier, SEBI was pushing everyone to go digital. But, now it has become easier. Mobile banking is going to be the future as it has huge potential,” he said.

Asserting that the rise in digital banking was mainly due to the use of mobile phones by the younger generation, he said this would continue to extend. Currently, the bank had more than 2.7 crore mobile users and it was adding 10 lakh users every 10-15 days, he said. On the Centre’s decision to bring down its stake in select PSUs, he said it was the governance and not the ownership of a bank that mattered. Closure of any enterprise, be it public or private, is against the interest of the common man and the taxpayers of the country, he said.

Indian Bank MD & CEO, Padmaja Chunduru, MD & CEO said over the next few quarters, the banking sector would face a misalignment between short-term costs and revenues due to the economic impact of COVID-19.

She also said that banks needed to review and prioritise current projects to ensure allocation of resources to the most pressing needs. Banks should also focus on investing in areas that will outlive the pandemic.

“These new digital tools will make banks more efficient and resilient to future changes. This will insure banks against such unprecedented lockdowns and perhaps better manage cost overheads,” she said.

In conclusion, she said though there would be disruptions and delinquencies, these challenges would open up choices for deepening customer relationships, investments in technology of the future, and shift in mindsets to truly adopt and execute future of work.