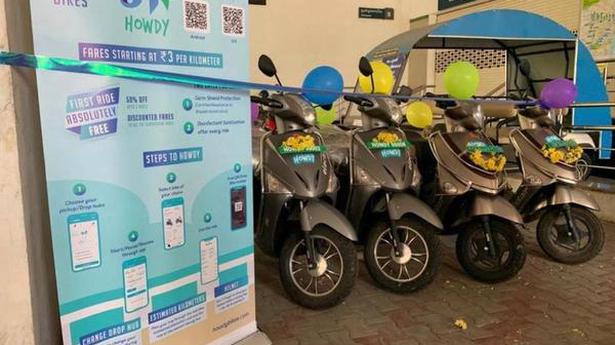 Commuters will have to pay Rs. 3 per kilometre and 10 paise a minute

Chennai Metro Rail has resumed last mile connectivity in a small way, with bikes on rent available for commuters now.

In two stations, Thirumangalam and Vadapalani, a firm Howdy Bikes has put up six electric bikes each that can be used by commuters, when they get off the station to travel to their end destination. In a week, these bikes will be available in Alandur station as well.

P.S. Venkatesh of Howdy Bikes said, commuters have to pay Rs. 3 per kilometre and 10 paise a minute on hiring this bike. “Last mile connectivity is crucial for commuters, failing which it will become very difficult for them to get home. We have begun with these two stations, as they have a reasonable patronage compared to the others. Also, we have made it mandatory to sanitise bikes after each ride,” he said.

Commuters who wish to use these bikes have to install the Howdy Bikes app and provide their license. The bike can be locked and unlocked using the QR code pasted on the bike. There are bikes available for long term hire too, he said.

Chennai Metro Rail officials said that they have been chalking out larger plans to resume last mile connectivity for commuters as the ridership is gradually getting better.