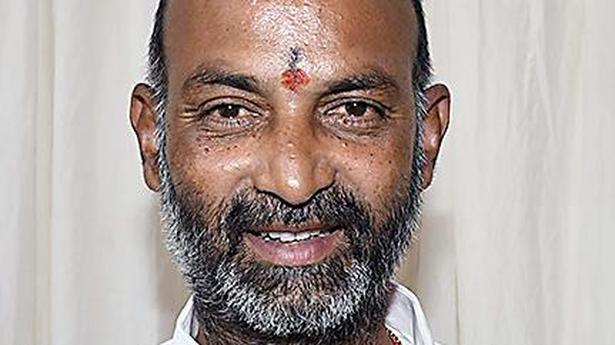 Telangana Bharatiya Janata Party has slammed Chief Minister K Chandrasekhar Rao for opposing the Centre’s power reforms “even before it was introduced in the Parliament and when the State’s power distribution companies are in financial trouble for not getting pending payments running into hundreds of crores.”

Addressing a virtual press conference on Wednesday from New Delhi, State president and Karimnagar MP Bandi Sanjay Kumar objected to Mr. Rao’s remarks and claimed the Central government has sanctioned ₹9,000 crore with which the State had paid arrears to the Discoms to some extent.

Just like the Centre has been providing funds for the domestic gas supply and consumption where consumers are getting direct benefit through their respective bank accounts, it planned to do the same for the power sector too but the Chief Minister is sending “wrong signals” in the minds of people, he said.

The BJP leader wanted to know why the State government has been unable to pay the arrears to the Discoms when they were in financial doldrums. It was only because of the Centre’s initiative that the Government has been able to provide uninterrupted power supply. “How would Telangana lose jobs with power reforms? How are the proposed power reforms detrimental to the interests of the State,” he questioned.

If the Chief Minister has real commitment towards providing free power to farmers, he should first clear all the dues to the Discoms and ensure subsidy to farmers.

The Member of Parliament and claimed that the Modi government was determined to cleanse the power sector by plugging loopholes. The MP advised the Chief Minister to emulate the neighbouring State which had issued an official order appreciating the power reforms instead of resorting to criticism against the Centre and “provoking” people.