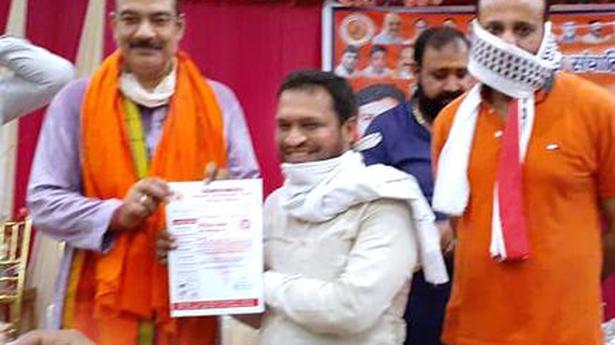 In a photograph that went viral on the social media on Saturday, the district president of the Bulandshahr unit of the BJP could be seen felicitating Shikhar Agarwal, one of the accused in the Bulandshahr violence of December 2008. A mob had allegedly killed inspector Subodh Kumar Singh after cow carcasses were found in the Syana area of the district. The party has distanced itself from the organisation behind the event.

Out of the 38 accused, police charged five with murder while Yogesh Raj and Mr. Agarwal, who are said to be associated with the BJP and its affiliate groups, were charged with inciting violence and arson.

In the event organised by the Pradhanmantri Jankalyankari Yojana Abhiyan (PJYA), BJP district president Anil Sisodia could be seen giving a letter to Mr. Agarwal affirming his appointment as general secretary of the Abhiyan (campaign) in the district. The letter mentions names of Union Cabinet Ministers Narendra Tomar, Giriraj Singh and Dharmendra Pradhan, among others, in the ‘Margdarshak Mandal’ in bold letters. The Facebook page of PJYA describes it as a political organisation, featuring BJP’s election symbol on it.

Denying any association with the organisation, Mr. Sisodia told reporters that he was invited as the chief guest and didn’t know Mr. Agarwal by face. He said the party believed in clean politics and steered clear of people facing such serious charges.

Sanjay Gurjar, general secretary of the BJP unit in Bulandshahr, said the organisation was not part of the BJP family. “We were invited by some local businessmen,” he said. On the use of names of senior party leaders on the letter, Mr. Gurjar said, “All options are open, including legal action.”

A person claiming to be PJYA national president Aneet Kaushik said the letter and the Facebook page were fake.